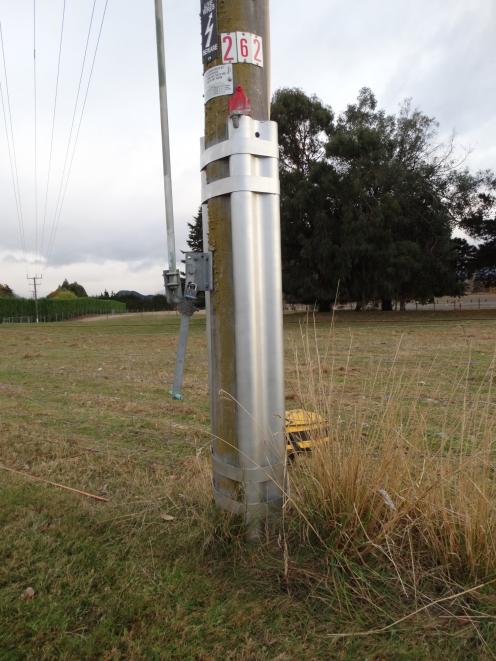 A metal fitting designed to stabilise power poles between Wanaka and Cromwell. PHOTO: MARK PRICE
The reliability of the two power lines bringing electricity to Wanaka from Cromwell is being questioned by Aurora Energy whistle-blower Richard Healey.

"Those lines are amongst the most appalling in the region.

"They are in incredibly bad nick," Mr Healey said.

"Over the last three years we have replaced or reinforced poles on the Upper Clutha network to ensure a safe and reliable supply to the wider Wanaka community."

And, while that work was continuing, he said, "it is important that we do not unnecessarily accelerate asset renewals, leading to further impact on prices."

The reinforcement has included driving long, metal "nails" into the ground alongside poles to improve their stability.

Mr Healey and Aurora have previously debated, and continue to disagree over, the effectiveness of this measure.

Aurora is now in the process of seeking approval from the Commerce Commission to spend $400million upgrading the network.

Its proposal includes a 23% average increase in Wanaka and Central Otago line charges and a 16% increase across the whole network, raising the ire of some community leaders.

As well as his concerns over the stability of the lines in strong winds or an earthquake, Mr Healey said the lines’ lack of capacity meant there was a risk of low voltage in Wanaka during peak demand periods.

Low voltage could cause some electric appliances, such as heat pumps and refrigerators, to fail.

"So unless you are over the top of this, and actively monitoring what’s happening in your house, you just put it down to bad luck, but, it ain’t bad luck. It’s down to low voltage," Mr Healey said.

Mr Coates said Aurora had worked to increase capacity, and was monitoring the region’s growth.

"Our growth forecasts indicate that further capacity upgrades to the Wanaka supply will be required around 2025 and we have a number of options that could be implemented."

Aurora was working with a provider on solar generation and battery storage, he said.

That company has previously declined to provide details.