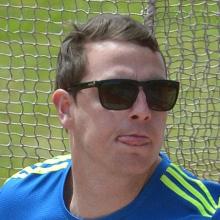 Unfortunately, his body was not.

The 31-year-old former Otago discus thrower retired from the sport earlier this month.

He had hoped to have one more big year and have a go at qualifying for the Tokyo Olympics, but a severe labral tear in his left hip in January left him requiring surgery.

"I was kind of a week of mulling over things back then, which was tough," he said.

"I guess now I’ve moved on from that. I’ve had quite a lot of closure and I’m quite content with my decision now.

"This season was always going to be my last season, just being an Olympic year and things like that."

Originally from Southland, Hall spent six years in Dunedin, obtaining degrees in psychology and social work at the University of Otago.

While in the city, he was coached by Raylene Bates and in 2009 won the first of 10 senior national titles.

He spent years grinding away, chasing targets to reach his goal of competing on the world stage.

In 2013, he made a "big life decision" to move to Auckland, both for work and athletics reasons.

He began to put extra focus into training like a full-time athlete and linked with coach Matt Dallow.

That focus helped him make the gains he needed to qualify for the 2017 world championships.

His throw of 64.55m in Salinas in the United States in the lead-up to the championships ranks him second on the New Zealand all-time discus rankings.

The world championships were his career highlight, throwing at London’s Olympic Stadium while Mo Farah and Usain Bolt were running.

However, they were hampered by a herniated disc in his back. It was the third time he had suffered the injury, having sustained it in his last warm-up throw.

"‘I had to make the call whether I go out and throw or not throw.

"I was just like I’ve worked my whole life to get to this point. If I don’t compete I might not get another shot.

"I just decided to pull on the black singlet and get out there. I’m so glad I did.

"Obviously, I didn’t compete too well because of that, but I suck that up and I’m OK with that."

Hall started coaching a year ago and hoped to do more of that.

He also hoped to get more family time with wife Lucy and 16-month-year-old son Freddie, while continuing to work at Oranga Tamariki supervising a team of social workers.