Suzie Bates has achieved just about everything she can in cricket.

The White Ferns all-rounder is either at the top or near the top of all the major records for New Zealand.

But there is one prize Bates has not collected.

She has never slept in her own bed on the eve of an international. 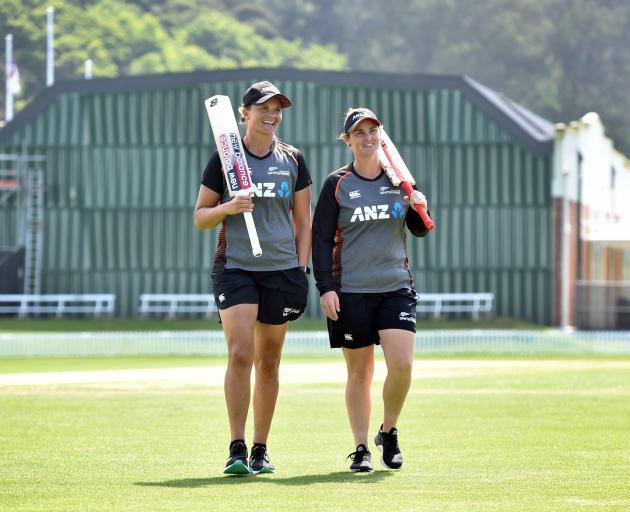 White Ferns duo Suzie Bates (left) and Katey Martin will play their first cricket international at their home ground today. Photo: Peter McIntosh
The right-hander has played her entire international career (115 T20s and 124 ODIs) outside Dunedin, and she is not alone.

Veteran wicketkeeper-batsman Katey Martin has played for the White Ferns for 17 years and the Otago Sparks even longer.

The 35-year-old lives in Christchurch these days but grew up in Dunedin and has never considered playing for another province.

Like Bates, all of Martin’s international cricket has been played elsewhere.

That will all change today — weather permitting. The White Ferns will play their first international in the city, a T20 against South Africa, since February 13, 1999 — exactly 21 years ago.

‘‘We’ve been pumped ever since we found out it would be in Dunedin,’’ Bates said.

‘‘It will be nice to sleep in my own bed and it’s just going to be nice for all those people that have helped us in our careers to be able to get down there and see us play.’’

Martin remembers the last women’s international staged in Dunedin. It was a one-dayer at Carisbrook, and the White Ferns had a healthy win against South Africa.

She was one of the lucky young cricketers who got to hang around the team for the day.

‘‘We’ve grown up playing for the Sparks and had a number of years in New Zealand colours.

‘‘I’ve been waiting 17 years for this. Just being at home and around the people we love will be pretty special.’’

Both have had one nervous eye on the forecast for the past month.

The game starts at 2pm, which is about the time a southerly change is expected to drag in a few showers.

It will be a homecoming of sorts for Leigh Kasperek, who had a long stint in Otago before transferring to Wellington this season, and Hayley Jensen, who transferred south from Canterbury this summer.