Alison Shanks and her team-mates are contributing to a golden era in track cycling. New Zealand completed its most successful world championships campaign in Melbourne on Sunday night, raising the prospect of multiple medals in the London Olympics.  Sports editor Hayden Meikle talks to a key player behind the team's success. 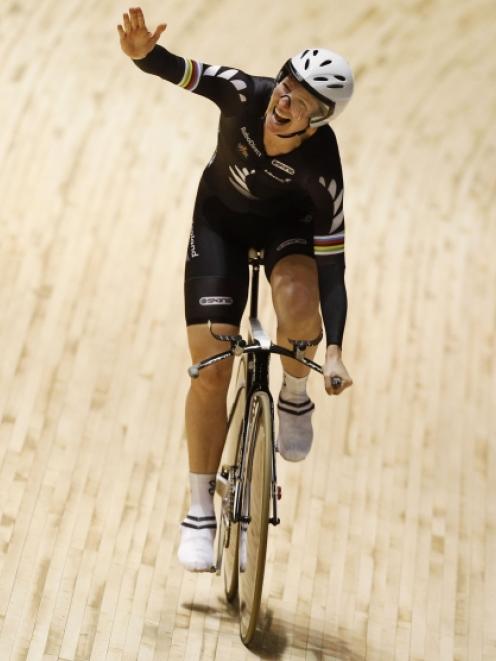 Shanks is a magnificent cyclist, now well established as one of the greatest in New Zealand history. It is just that her focus for most of the past two years has been on the team pursuit, the Olympic event, and not the individual race, controversially cut from the programme.

The BikeNZ high performance director was delighted but not at all surprised to see Shanks regain the individual pursuit world title she first won in 2009 with a convincing win over old adversary Wendy Houvenaghel.

"Ali has been working towards that sort of performance since she won in 2009," Elliott told the Otago Daily Times from Melbourne yesterday.

"She trained particularly well over the last month, and we had a fair understanding she was in good form.

"We have high expectations of all our riders. This whole campaign, we've been trying to get them to come up with their best performances.

"Ali has been around a long time. She knows how to compete at the top level, and how to turn opportunities into gold medals."

Shanks was particularly impressive in qualifying on Sunday, riding a personal-best time of 3min 27.268sec.

"She came out really strong in the morning, and showed lots of confidence," Elliott said.

"We've seen it from our guys all week. They've gone out hard and come home hard.

"What was also really nice was seeing Ali really enjoy the last two laps. You don't often see a subtle smile on Ali's face that late in a race.

" It looked like she was really enjoying herself out there."

New Zealand has been no stranger to success on the cycling track in recent years, and the team won a record five medals in Melbourne. Shanks claimed the only gold.

Sadly, she will not get the opportunity to repeat the effort In London. Individual pursuit was cut by Olympic cycling chiefs as part of a gender-balancing rejig of the track programme.

Elliott said there was no time to be bitter. The decision had been made and it was unfortunate, but Shanks could still get on the podium with the pursuit team.

The New Zealand women's pursuit team finished fourth in Melbourne and will be a genuine medal chance in London. BikeNZ has targeted four Olympic medals across its programmes.

It was a great time to be involved in New Zealand cycling, Elliott acknowledged.

"It's exciting at the top, but it's equally exciting underneath," he said.

"We've got the junior worlds in Invercargill this year, and the talent we've got in that junior team is equal to, if not better than, where our senior athletes are.

"It's the perfect storm. We've got talent at the top and talent pushing underneath."

Elliott put the success on two wheels down to a combination of factors.

"Not to the level of some of our competitors, but we've made the most of what we've got.

"We've also had continuity. A very solid staff over the last four years has built a lot of knowledge.

"It's about getting the best out of the athletes, and we will keep striving to do that."

Otago's cycling queen returns home today. Two-time world pursuit champion Alison Shanks will be at home in Dunedin for a spell before her Olympic campaign resumes in earnest. Her flight is scheduled to arrive at Dunedin Airport at 5.05pm.