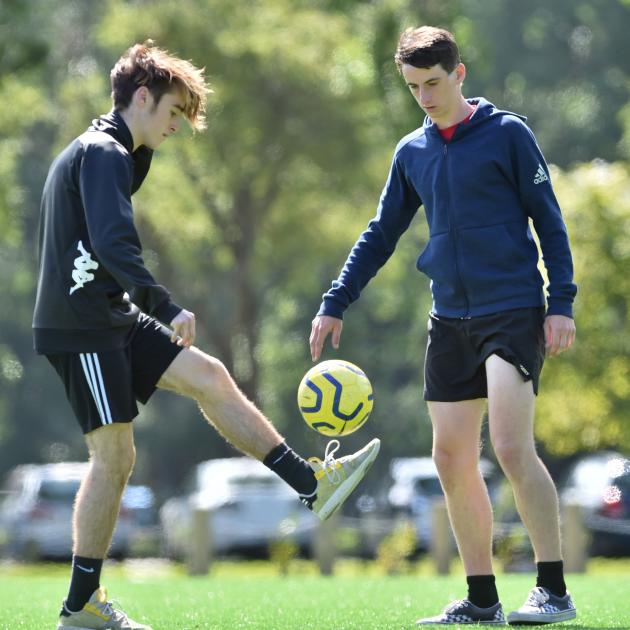 Josh Skryba and Ben Lund play with a ball at Logan Park Turf yesterday as they prepare to head to Brazil next week. PHOTO: GERARD O’BRIEN
Two Dunedin teens are preparing to live the football life in one of the sport’s top countries.

Midfielder Ben Lund (17) and winger Josh Skryba (18) leave next Friday for a month-long trip to Brazil.

There they will train and play with the academy at Brasilis FC in Aguas de Lindoia, Sao Paulo state.

Should they impress, there is a chance they could be asked to stay longer.

The club acts as a gateway club for players to develop and progress to larger clubs.

Among its alumni is former Liverpool midfielder Lucas Leiva, who has also played for the Brazil national team.

The duo received the opportunity through former Brazil representative Luiz Uehara, who coaches them at Northern where he places an emphasis on youth development.

Neither was going to play for Northern initially, although when things fell through at their previous team, that is where they ended up.

They began in the second team and worked their way into the first team.

Uehara had been highly impressed by both boys and using his connections from his home countries, sourced the opportunity.

It was something that resonated with what another former Dunedin player had said to the boys.

"I remember Joel Stevens said something when he came back that football was a lot about luck," Lund said.

"I guess this is testament to that.

From there it had been an easy decision.

"If we didn’t take this opportunity I would be pretty annoyed at myself for the rest of my life," Lund said.

"So definitely super excited to go over to Brazil, kind of the home of football, and try our feet."

Both are expecting a high level of football, buth hope playing in the local men’s premier league will help with the physicality.

They had previously played representative football and Skryba travelled to the Milk Cup.

This was likely to be another step.

"[We just want to] show that New Zealanders can play football sometimes, but we’ll see what happens, just try our best," Skryba said.

"We’re definitely expecting a lot higher level than we get here."

While there was a chance of getting a contact with the club, that was not the focus.

Neither was going over with expectations and Lund said enjoyment remained key.

"It’s all about the experience, neither of us are really treating it as a trial.

"We’re just going over there to learn as much as we can and enjoy playing football at a really high level."