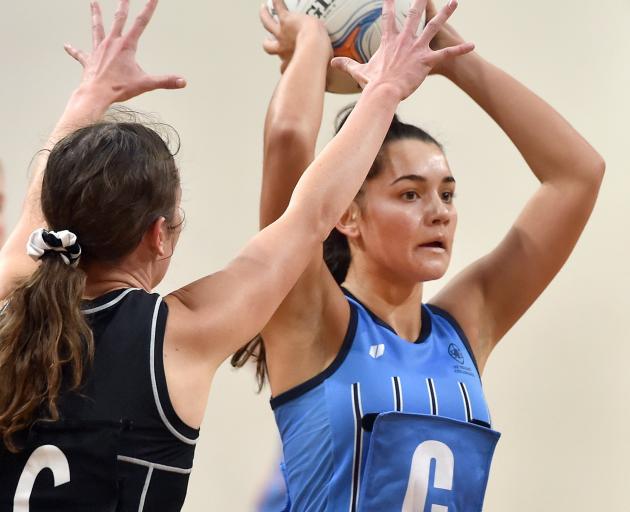 St Hilda’s centre Gemma Rowcroft assesses her options while defended by Southern centre Grace Herdman during the Dunedin premier club netball game at the Edgar Centre on Saturday. PHOTO: PETER MCINTOSH
College A has cruised to two wins from two games in the Dunedin premier competition.

A team performance contributed to its 73-42 win over South Pac at the Edgar Centre on Saturday.

After building a 20-goal lead in the first half, College was able to make positional changes in the latter stages of the game and trial different combinations.

College quickly settled into its work and a run of six unanswered goals helped establish its lead.

Wing attack Zoey Flockton, who joined the club this season, drove well into the pocket and fed some nice passes into shooters Talei Pelasio and Ivy McLean.

Defensively, the team put pressure on South Pac’s centre pass and in its shooting circle.

Wing defence Mia Allison was impressive and nabbed several intercepts, although she caught the attention of the umpire later in the game for too many contacts.

What helped build that lead was the team’s ability to regain possession if it lost it.

Several times in the second period, in particular, College was able to win back the ball after a missed shot or loose pass.

Goal attack Kiana Pelasio joined sister Talei in the shooting circle and the lead was pushed out.

South Pac centre Ivari Christie, who made her debut for the Southern Steel in the ANZ Premiership on Wednesday night, was a standout player for her side.

She led the attacking end and shone on defence, collecting plenty of ball.

Although it took South Pac five minutes to score in the third quarter, the team improved as the game progressed.

Christie connected well with shooters Stacey Hopwood and Puawai Shortland and delivered some well-placed passes into the circle.

College made lots of changes throughout the second half and was able to get all its players on the court.

Even with the introduction of new players, College continued its tight defence and quick movement down the court.

McLean was partnered with both Kiana and Talei, before Kiana moved into centre for the final few minutes.

Only five goals separated the teams in the final quarter but College had built a substantial lead by that point and the win was secure.