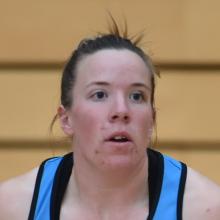 Abby Erwood
Abby Erwood's form from the ANZ Premiership has propelled her into the national picture.

The defender joined four others from this year's Southern Steel team in the New Zealand netball squads announced yesterday.

A former youth world champion, Erwood had a stand-out season in which she reclaimed the starting goal defence bib for the Steel.

She was included in the Silver Ferns development squad, alongside wing defence Kate Heffernan.

Heffernan was equally impressive in Steel colours and retains her spot in the national development squad.

The trio were all part of the successful World Cup campaign.

Eleven of the 12 players from that were retained, Casey Kopua having retired.

They will play Australia for the Constellation Cup in October and a squad of 12 will be announced on September 23.