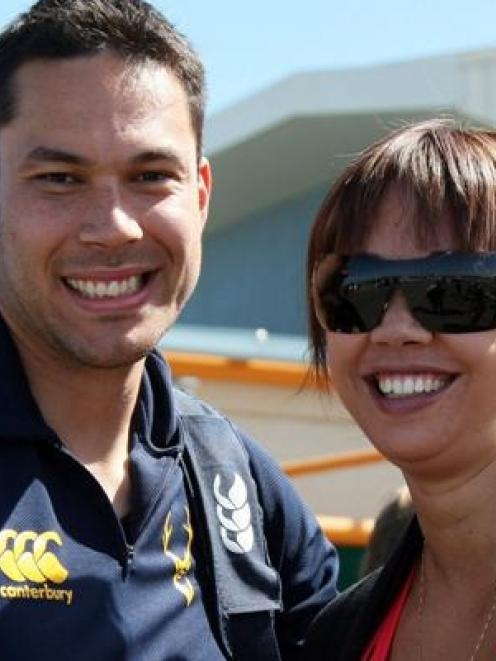 Daneka Wipiiti (right) pictured with her partner, Southland and Highlanders rugby player Joe Tuineau, at Invercargill airport in October. Photo by NZPA.
If genes count for anything, then a star has been born.

With mum measuring in at 1.94m and dad a lofty 2m, the couple were expecting a big baby.

But at 54cm she is just a shade over average.

According to her proud mother, though, Kilani-Mae has big hands and feet and long limbs.

"She's just a normal size which was great for me because I was able to have a nice normal birth," Wipiiti said.

"But she has very long limbs.

"Her arms and legs are very long and she has big hands and big feet, just like her dad.

"She's going to be the little giant of the family."

Five hours after giving birth, Wipiiti made her first steps towards returning to court, strolling out of hospital.

"Some people thought I should stay in hospital for a few days to recover but I've got a quick turnround and have tried to do as much as I can.

"I've gone for walks and am trying to keep as active as I can."

The former Silver Fern is on light duties for the next two weeks - doctor's orders.

But as soon as she has recovered she plans to get back into training and the gym.

Wipiiti left the Steel after round 11 of the ANZ Championship and is committed to getting fit in time for the season opener against the Fever in Invercargill on March 21.

The family is having Christmas in Auckland and Wipiiti will link up with the Steel squad in Invercargill on January 18.

Tuineau is in camp with the Highlanders, preparing for his first Super 14 season.