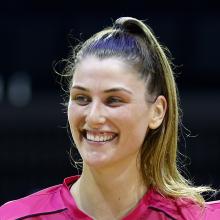 The 22-year-old goal attack found herself in a new role for last Sunday’s must-win game against the Waikato Bay of Plenty Magic.

Saviour Tui had been ruled out with illness, leaving Heffernan to shoulder the full responsibility of the bib.

Saturday’s loss had been disappointing for the team.

But when it needed a performance, Heffernan stood up and slotted 18 of her 20 shots to help keep the Steel’s playoff hopes alive.

It was reminiscent of her performance earlier in the season against the Central Pulse, in which she delivered in the big moments to pull off the most unlikely of comebacks.

They were the two most telling performances that, despite the ACL injury that led her to miss last season, proves Heffernan very much remains a class player.

She has alternated well with Tui throughout games for the most part this season. But there have also been those sublime glimpses when the pressure is on.

That is not easy to do and at times she has played as well as she ever did pre-injury.

"I think from the whole year of rehab I worked hard on my footwork and my feed. I think I’ve been able to bring that into my game a bit more," Heffernan said.

"When I’m playing well, I think I’m playing some of the best netball I have. I just need to work on my consistency, I think, and that’s a focus for me at the moment."

Heffernan has had to be adaptable this year.

On some occasions she has started and played the majority of the match.

On others she has started and alternated with Saviour Tui.

Mostly, though, she has been injected late in the first quarter and played two or three shorter stints throughout the game.

That is something new to her.

Both Heffernan and Tui bring different strengths and alternating them forces the defence to adapt.

It also enables them to play with shorter, more intense bursts of energy, before recovering and going again.

The flip side is that coming on and off, having to flick a switch and not being able to get into a rhythm is not as easy as it looks.

It was something Heffernan felt she had developed throughout the season.

"I think it’s something I’ve gotten better at this season," she said.

"It’s being able to switch on and off for me. When I go on, I’m completely switched on, I know my role and what I’m asked to be doing.

"When I come off it’s just relaxing, watching the game and making sure I’m aware of what’s going on and what the goal defence is doing.

"It’s quite good because I always know I’m expecting to go back on, [so] it’s not a surprise when I go back on. They prepare me pretty well to go back on when I come off.

"I don’t really mind it; it’s been good. Me and Saves [Tui] have enjoyed learning a lot off each other this year."

Heffernan’s ability to perform when it matters will be key tomorrow.

The Steel faces the Northern Stars in Invercargill essentially needing to win to keep its playoff hopes alive.

Last time the teams met, early in the season, the Steel took a comfortable win.

However, the Stars were missing several players that night and have come into form lately.

"I guess all our games are must-wins now," Heffernan said.

"It was a bit of a bump in the road, Covid, and that screwed up a couple of our games afterwards. It took us a while to get over that.

"But I think over the weekend we’re showing the strength we had before Covid and we’re back on track.

"I think we can definitely win these next couple of games and keep our chances of playoffs alive. That’s what we’re really working towards and hoping for."