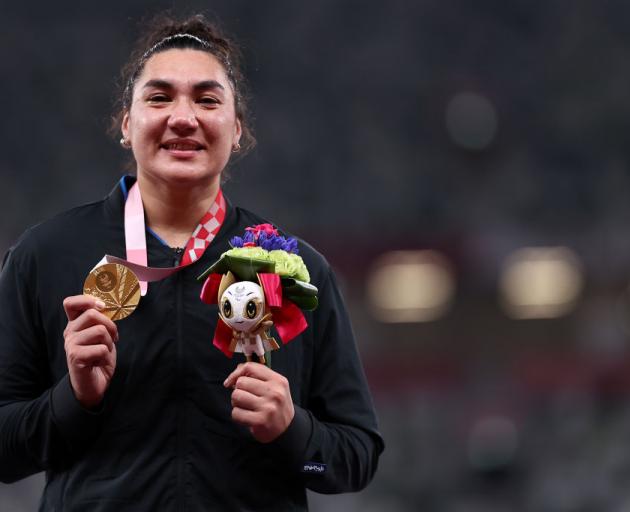 Adams completed a remarkable three-year rise from rookie to Paralympic champion, crushing her competition in the women's F37 shot put final on Saturday night; with coach and elder sister Dame Valerie Adams offering advice and applause from the stands.

However, many viewers were left frustrated by TVNZ's free-to-air television coverage which showed shots of the crowd at the National Stadium instead of Adams' final throw of the event.

"Was really brassed of with the tv coverage. We sat up to watch this amazing woman, only to have her final throw not shown on Duke but a great cover of the audience!," one fan wrote on the New Zealand Olympic team's official Facebook account.

Other fans took to various social media platforms to voice their dissatisfaction. However, TVNZ had warned viewers earlier in its television coverage that this exact scenario could play out and even adapted its content plan after a similar occurrence on Friday.

On Friday evening, men's shot putter Ben Tuimaseve's event was not featured at all in TVNZ's coverage, forcing the broadcaster to apologise and provide an explanation to his family and supporters.

"TVNZ Duke had athletics on schedule, and we were waiting to see Ben throw, so this was disappointing for us and no doubt his friends and family at home," a TVNZ statement provided to Stuff said.

"Given we are not receiving all the athletics events live on the host feed, we are working out a plan going forward to ensure our New Zealand Paralympians in athletics are all heroed."

"Tonight's athletics events with (shot putters) Lisa Adams and Caitlin Dore competing will be available to watch on 1news.co.nz (no commentary) from another feed from the host broadcast," PNZ said.

"Full athletics coverage would be available on TVNZ Duke on Freeview 13 | SKY 23, however TVNZ cannot guarantee the shot put event will be shown."

TVNZ is the sole local-broadcaster of the 2020 Tokyo Paralympics and is reliant on a television feed provided by the International Paralympic Committee.

Pretty damned hopeless TVNZ. While Sky is showing multiple reruns of last months Olympics we get stuck with one channel that doesn't follow NZ competitors. Not good enough TVNZ