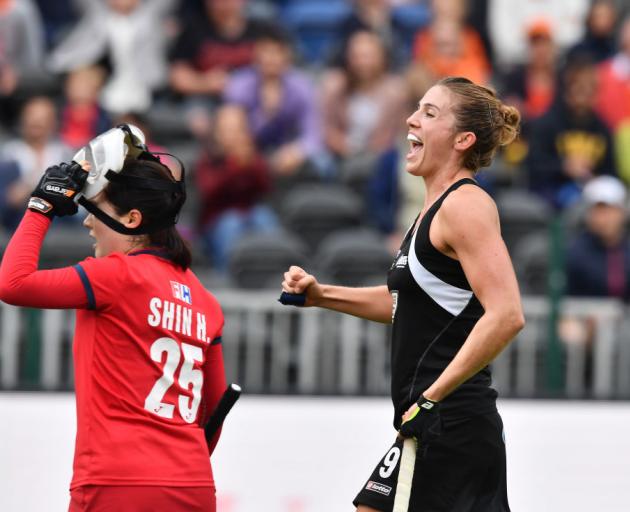 Brooke Neal (right) in 2017. Photo: Getty Images
When former Black Stick Brooke Neal posted an open letter on social media, she wasn't expecting it to resonate with some of the biggest sporting superstars in the world.

But her raw and honest post on Instagram detailing the mental health battle experienced by many Olympic athletes has captured the attention of many in the sporting world, including American gymnastics star Simone Biles and the most successful Olympian of all time, Michael Phelps.

Neal, who retired from hockey last year following the postponement of the 2020 Olympics in Tokyo, posted a lengthy message on the social media platform last week titled "Dear Olympian, a letter I wish I got post Olympics".

In it, the 29-year-old discusses the lows many athletes face after returning from the highs of the Olympics.

"So you might be a little confused right about now. You've just competed at the world's biggest sporting event and yet, this is one of the lowest times you've ever felt," she wrote.

"You have been in this bubble, your own little world, with 10,000 athletes who are at the top of their game. You have poured blood, sweat and tears to get there, but you weren't really prepared for the day after. For the week after. For the months after this huge spectacle.

"You weren't prepared for life to continue as if nothing happened. When you walk down the street and from the outside, you still look the same. But your insides are still processing all that you've been through, and no one can see that. 'They don't understand', you might think. Not even your close friends and family.

"This is the hard part – because unless they have experienced the Olympics before, how can they possibly understand? Yet somehow, you get frustrated at them and you're unsure what they even did that was wrong. It's ok, it's part of the process. Continue to connect with them and walk them through your feelings.

"On one hand, you think, 'Yeah, that was frickin epic. What an experience" but on the other hand, your heart has been ripped to shreds from the rollercoaster you've been on and you're on the verge of tears over the smallest things. Like you're a tree that hasn't put its roots down and the smallest gust of wind could knock you over."

The letter has garnered over 44,000 likes on Instagram and hundreds of comments from fans and athletes.

Neal ended her letter with a message of hope: "What I know for sure is that everything you're feeling will pass. You will start to feel better, I promise. Take it one step at a time, one day at a time, and remember that you are exactly where you are meant to be."

Along with Biles and Phelps, who have both been open about their mental health battles in the past, Neal's post also resonated with many in the New Zealand and international sporting community, including Kiwi Olympians Blair Tuke and Sarah Hirini.

"Holy reading this made [me] cry," said Black Ferns Sevens captain Hirini, who recently won gold in Tokyo. "It's so very true … how is this not talked about more?"

Neal, who represented New Zealand at the 2016 Rio Games and is now a wellbeing coach, said in another post that she is "blown away" by the reaction to her letter and that she's "never been more hopeful that our voices can create change".

"I have heard from thousands of people from around the world who have had conversations with their loved ones about what they are feeling. Whether it was a mother who didn't understand what their daughter was going through and now she does, or the countless Olympians (many who have medalled) who thought they were alone in these feelings.

"Yes, as Olympians, we are extremely grateful for getting the opportunity to do what most only dream of. But because of this, we also hold onto this immense guilt that we should feel nothing but gratitude. When we feel empty, lonely and sad, it's so hard to communicate this to others because from their perspective, what they see is someone who got the opportunity of a lifetime.

"So, let's get to work! It starts with us. Using our voice to make change. We can prioritise ad normalise these conversations. Athletes are humans first, let's not forget that."

Neal earned 176 caps with the Black Sticks during her career and was part of the Olympic team that narrowly missed out on bronze in Rio, finishing fourth.