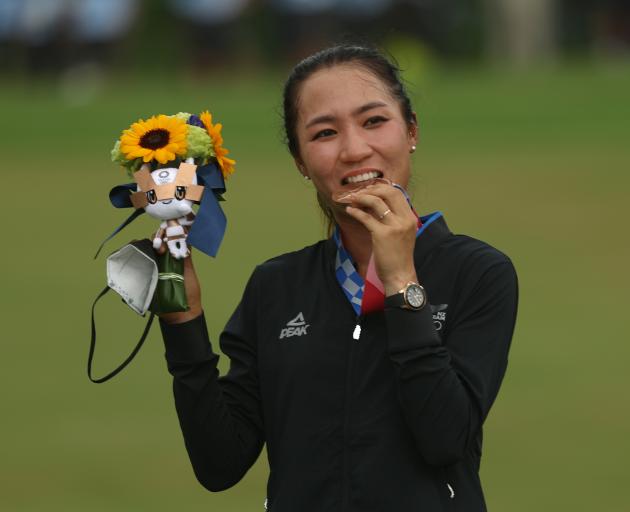 Lydia Ko with her bronze medal to go with the silver she won at Rio in 2016. Photo: Getty Images
Lydia Ko has created a slice of Olympic history, claiming a brilliant bronze medal in Tokyo.

In an Olympics that has seen so many landmarks for New Zealand athletes, Ko is now the only two-time medallist in women's golf, as she bagged New Zealand's 20th medal in Japan with a final round six-under 65.

Her Tokyo bronze followed her silver at the 2016 Games as a 19-year-old, an achievement made all the more remarkable given what took place in Ko's career during the five years in between. 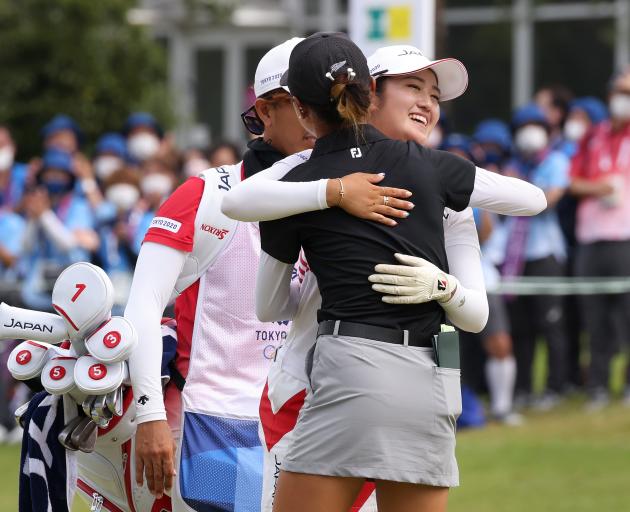 Lydia Ko (in black) embraces Mone Inami after the tense playoff for silver in Tokyo. Photo: Getty Images
Before her Olympic medal in Rio, Ko had won 14 times on the LPGA Tour. But from that date until April of this year, she managed just one victory, as the former phenom went through the toughest patch of her career.

A victory in 2018 was followed by a significant stretch of struggle, but Ko slowly turned it around to the point where top 10 finishes were constant, and in April she broke through to end a near-three year drought, and came into the 2021 Olympics just as she did in 2016 – as one of the favourites for a medal.

If her first medal was an expected prize, its companion is a reward for resiliency – which was also on display in the final round.

#BRONZE for Lydia Ko!
What a day, Lydia has become the only two-time Olympic medallist in Golf 🌿
We 🖤 how you have represented NZ with such pride this week & we are so proud of you in return Lydia!#EarnTheFern #Earned#KoTātauTeKapaAotearoa @GolfNewZealand #GoKo pic.twitter.com/t9xp0Psgut

Beginning the day in a share of third, five shots off the lead, Ko produced a sensational start, with dart-like wedges and irons, as well as a handy chip-in, seeing her birdie four of the first five holes.

Two more birdie putts just slid wide of the hole, but as Ko was cleaning up for par, overnight leader and world No 1 Nelly Korda had a mini-meltdown, twice watching an attempted chip shot roll back to her feet as she double bogeyed the seventh hole.

Suddenly, Ko was in a share of the lead.

It wasn't to last long though, as Korda rebounded from the chipping crisis to hole three straight birdies, while Ko plonked an approach into the bunker on 10 and sliced a drive into the trees on 11, recording back-to-back bogies to halt her run.

All the while, Japan's Mone Inami was on the charge, while world No 200 Aditi Ashok was hoping to make history for India as a clear top four emerged on course.

Other contenders soon turned out to be pretenders – Denmark's Emily Pedersen's finish to the round can be summed up by her stomping on her golf bag and slamming her putter into the green, while 2016 bronze medallist Shanshan Feng of China and Australian Hannah Green left their runs too late.

Ko was fluctuating between silver and bronze on the leaderboard, finding birdies on 13, 14 and 15 to close within one shot of Korda, but she pulled a shot on the par-three 16th and couldn't clean up for par, sitting two shots back with two holes to play.

If that wasn't dramatic enough, the expected storm which had threatened to cut short the tournament then made an appearance, just as Ko had launched a superb drive to give herself an eagle chance on the short par-four 17th.

Fortunately, the delay was only 45 minutes long, and after the restart Ko two-putted for birdie, sending her to the last in the bronze medal position on 16-under, one shot behind the co-leaders, Korda and Inami, and one ahead of Ashok.

On the final hole, Inami found the bunker, and discovered a terrible lie when in there, finishing with a bogey, while Ko's perfect drive was followed by a mediocre approach shot, which left her a tough two-putt.

Korda had no troubles, calmly securing a par to take a deserved gold medal, and after Ko lagged her first putt close, she was left with a nervy second putt to make par, knowing it would ensure a medal after Ashok missed her birdie putt.

It never looked like missing – and after she half-jokingly wiped the sweat away from her brow, it was off to a playoff with Inami to decide the silver and bronze medals.

Ko didn't seem too concerned though, and after her drive landed in the bunker, forcing her to lay up, she completed a round of good spirit by cheering for Inami to hole a long putt, reacting alongside the locals in attendance when it just went wide.

It didn't matter though – Inami tapped in for par, and Ko couldn't match her, taking home the bronze to add to the silver already in her collection.

Gold in Paris, perhaps? After what's happened in the last five years, you wouldn't bet against it.