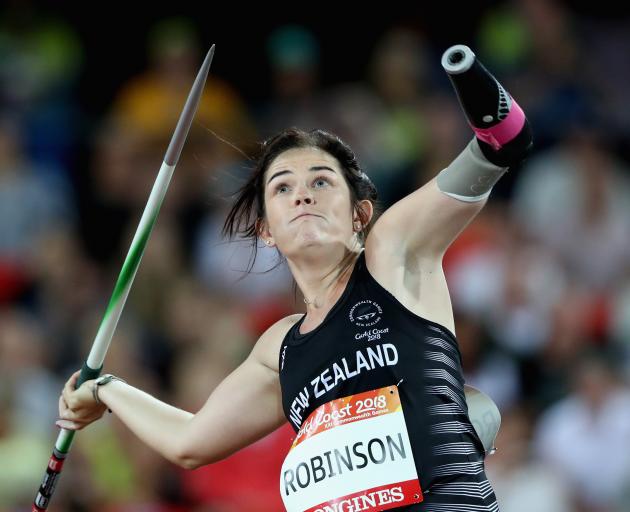 Holly Robinson hurls the javelin to a silver medal at the 2018 Commonwealth Games on the Gold Coast. PHOTO: GETTY IMAGES
Dunedin’s star Paralympic duo will both compete for medals in Tokyo today. Jeff Cheshire looks back at the journey Anna Grimaldi and Holly Robinson have taken to this point.

2011: Moves to Dunedin from Hokitika aged 16 to further her athletics career and work with coach Raylene Bates. Attends the world championships in Christchurch and places fifth in the F46 javelin.

2012: New Zealand’s only female athletics competitor at the London Paralympics. Finishes seventh in the javelin with a throw of 32.58m.

2014: Breaks her own national para-records in the javelin and shot put at the China IPC Athletics Grand Prix in Beijing.

2015: Continues to improve her distance at her second world championships, this time throwing 38.18m to claim bronze in Doha.

2016: Throws 40.81m in Australia early in the year to cement her spot in the team for the Rio Paralympics. There she manages a personal best of 41.22m, but is edged for the top spot by British rival Hollie Arnold and takes home silver.

2017: Throws 42.41m at the world championships in London, but again Arnold prevails, throwing 43.02m, and Robinson has to settle for silver again.

2018: It seems Robinson is certain to win gold when she unleashes a world record throw of 43.32m at the Commonwealth Games on the Gold Coast. Just 20 minutes later, Arnold puts out a throw of 44.43m, breaking the world record at a third consecutive major meeting.

2020: Has a quieter year as the Paralympics are rescheduled and injuries plague the early part of her summer.

2021: Becomes New Zealand’s first para-athlete to win a medal in an open national championship when she claims silver in the senior women’s javelin. 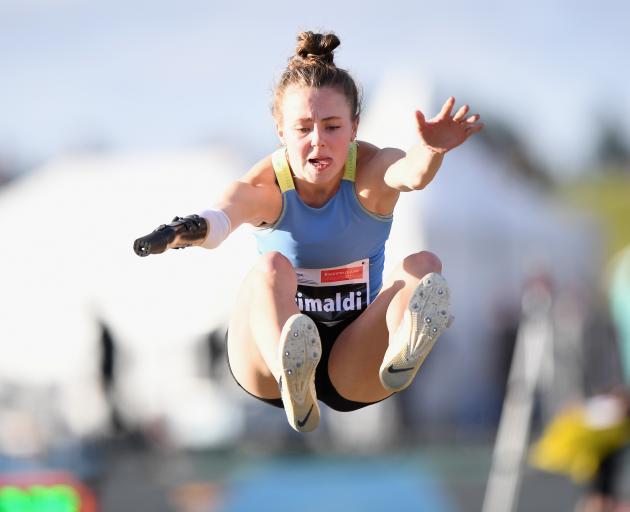 2013: Takes up long jump after being identified at a “have a go” athletics day.

2014: Impresses on the national stage and is named para-athlete of the meeting at the national secondary school championships. Begins to rewrite the national para-records book. Jumps 5m for the first time.

2015: Jumps a then-personal best of 5.41m to win bronze in the T47 long jump at her first world championships, in Doha.

2016: Adds 21cm to that personal best in Rio, where she jumps 5.62m to win gold at her first Paralympics. Heading into her final jump, Grimaldi sits in third place but trails Cuba’s Yunidis Castillo by 17cm. She delivers a clutch moment, flying 20cm further than she has before to snatch a surprise gold.

2017: Injuries play a part in the build-up to the 2017 world championships in London. Despite being in visible pain, her jump of 5.21m puts her in second place heading into the final round. However, she falls to fourth in the last round. After she returns home, it is discovered she has a stress fracture in her foot.

2018: Grimaldi takes 18 months to rehabilitate from the injury. In December, she takes her first steps back into competition.

2019: Makes a full return to jumping and pulls out one of the best jumps of her career — 5.50m — to claim silver at the world championships in Dubai. It leaves her just 2cm off gold.

2020: Finally back to her best, Grimaldi jumps 5.72m late in the year to break the personal best mark she set in Rio.

2021: The personal bests keep on coming, and Grimaldi breaks 5.70m in each of her four competitions. That is headlined by a 5.91m jump, just 10cm off the world record. It is also a jump that ranks her second among all women in New Zealand so far this year.