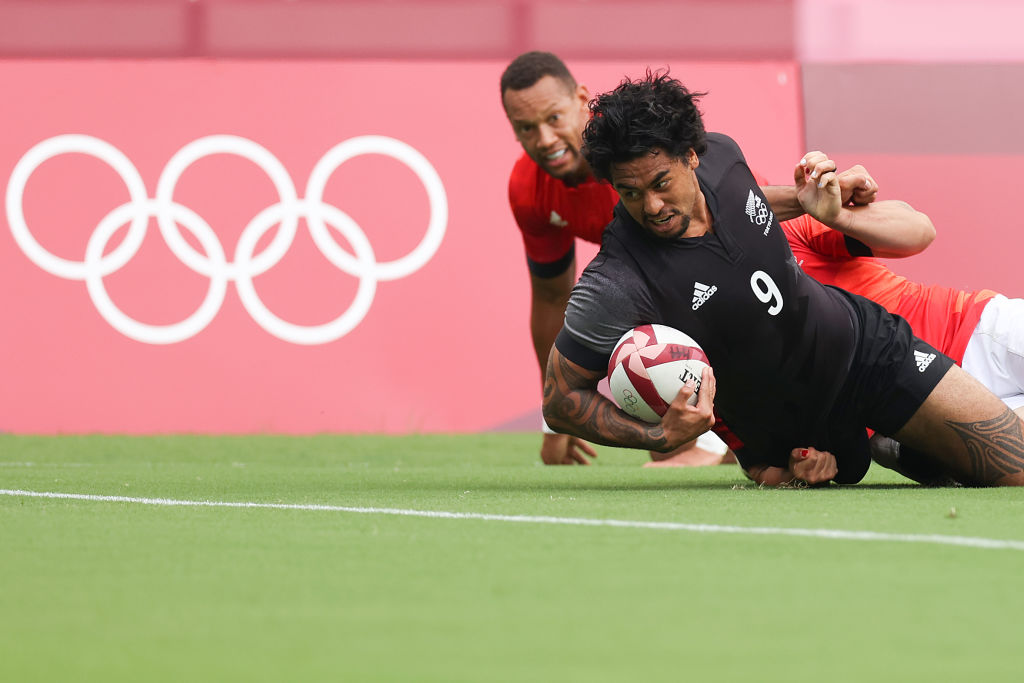 Regan Ware is tackled short of the try line during the Rugby Sevens Men's Semi-final match between New Zealand and Great Britain. Photo: Getty Images
Wing Regan Ware and inspirational captain Scott Curry scored two tries each as New Zealand defeated Britain 29-7 in their semi-final at the Olympic Rugby Sevens to set up a gold medal meeting with old foes Fiji at the Tokyo Stadium on Wednesday.

Defending champions Fiji held off a strong first half showing from Argentina to win their semi-final 26-14, their physicality and experience too much for the South Americans.

New Zealand held onto possession for the opening three minutes of the first clash with Britain as they moved up field from their own 22, which resulted in a first try for Curry.

But Britain needed just 15 seconds on the ball to draw level as Dan Norton showed his electric pace as he glided between two defenders and raced away to score.

Ware showed his speed on the right wing to score a second try for New Zealand on the stroke of halftime that gave them a 14-7 lead, and three more tries in the second period settled the contest.

"It is huge. It is what we came here for, to be in this position. We are really excited by the opportunity ahead of us now," Curry said.

"We’ll get a good nap in this afternoon in the A/C (air conditioning), cool down a bit and get ready for the next one."

Fiji opened the scoring against Argentina in the second semi-final as the hugely impressive Sireli Maqala brushed off three defenders to dot down.

But the South Americans led 14-12 at the break as tries from Marcos Moneta and Ignacio Mendy handed them the advantage.

Fiji’s experience showed in the second half with Jiuta Wainiqolo and Semi Radradra scoring to brush aside the challenge of the Argentines.

"The All Blacks will be hard, so we have to try to give this intensity. We will try to stick to our system, our own way. Hopefully we will give them a good match," Radradra said.

Britain, who were silver medallists in Rio de Janeiro five years ago, will meet Argentina for bronze.

"It is important for us to have something tangible that other people can really understand in terms of success, so the next game becomes big as well," Britain's injured captain Tom Mitchell said.

South Africa and the United States play-off for fifth place after they defeated Australia and Canada respectively. Kenya beat Ireland to ninth, while hosts Japan avoided the wooden spoon with a 31-19 victory over South Korea.