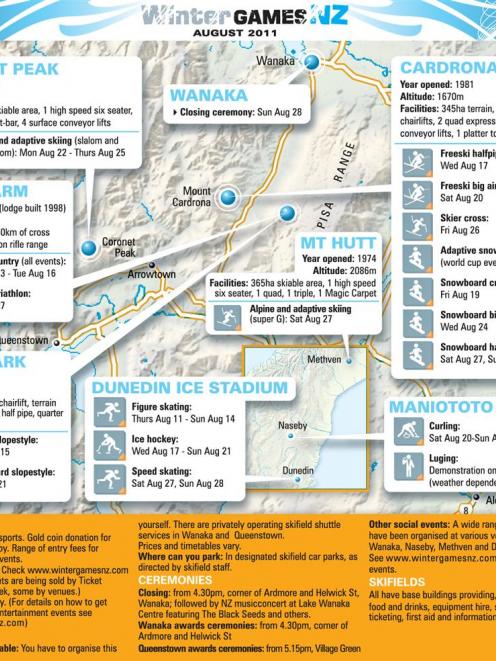 Winter Games NZ information.
The slopes, pipes and rinks of Otago are about to be invaded by more than 1000 athletes from 50 nations for the biggest international sporting event on the district's calendar.

The second Winter Games has attracted world-ranked athletes whose names do not easily roll off the tongues of New Zealanders but are prominent in their own countries.

They will be trying to rein in the Canadians, who were across the podium like a red rash in 2009.

Devon Kershaw (28), Alex Harvey (22) and Ivan Babikov (31) were part of the Canadian juggernaut at the inaugural Winter Games in 2009 and they have returned, along with partially sighted Paralympic gold medallist Brian McKeever (32).

New Zealand's best prospects are Canadian-based New Zealanders Nils Koons (22), the younger brother of Olympian Ben Koons, and former Dunedin athlete Andy Pohl (22). They will have to pull off a major upset to share the limelight.

In Dunedin, the action is all at the ice stadium.

The figure skating programme began on Thursday and concludes with a gala tomorrow.

Ice hockey dominates the stadium from Wednesday, with the New Zealand facing Australia and China in what could be a fast and furious three-nation test series.

After 22 years of trying, the Ice Blacks first beat the Aussies 5-4 in 2009 and went on to win the third division world championships in 2009.

On Monday, highly ranked Wanaka brothers Jossi (21) and Byron (19) Wells will compete in the freeski slopestyle at the Snow Park.

Both are podium prospects, along with X-Games gold medallist Charles Gagnier, of France, and the trio will be hunting medals again in Cardrona's halfpipe on Wednesday.

Curling and alpine ski racing take place in the second week of the games.

Paralympic gold medallist Adam Hall (23), of Wanaka, is expected to dominate his alpine events, while Japan is sending a strong adaptive team to compete in cross-country skiing.

The adaptive programme has been extended this year after athletes successfully proved their disciplines could be integrated with able-bodied competition at the 2009 Winter Games.

An addition is the Para Snowboard Cross World Cup event at Cardrona Alpine Resort on August 18, which will feature US women's world champion Amy Purdy (31), who had both her legs amputated aged 19 after contracting bacterial meningitis.

"We continue to believe no distinction should be made between any athletes that perform at the highest possible level, against the best in the world," Winter Games chief executive Arthur Klap said.

"It worked really well in 2009 with athletes enjoying the concept."

The Winter Games finish on August 27-28 with speed skating at the Dunedin Ice Stadium. New Zealand, Australia, Singapore and Korea are represented.

Wanaka multisporters Gavin Mason (31) and Simone Maier (31) are home-town favourites to win the winter triathlon at the Snow Farm on August 27 - the only Games event anyone can enter - and the show wraps up on August 28 with snowboard stunts in the halfpipe at Cardrona.