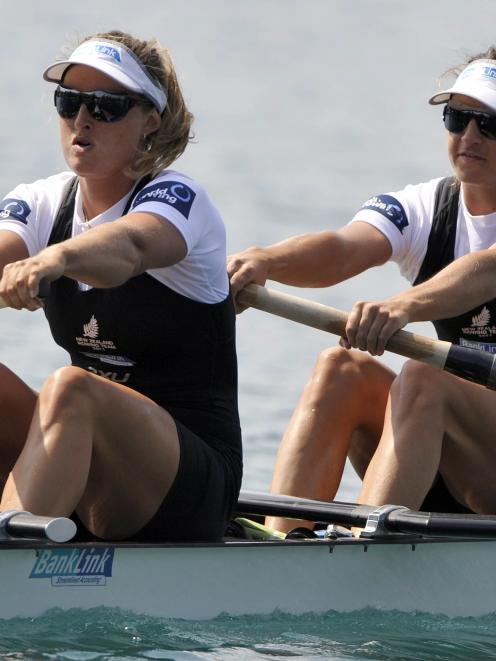 Trailing the outstanding Great Britain pair Helen Glover and Heather Stanning for almost all of the race, the Kiwis took the victory in the last couple of strokes to win by eight one hundredths of a second.

Haigh and Scown, the reigning world champions, had looked good in qualifying for the final, but the smart money was on the British pair taking out the title.

The Kiwis trailed the Brits by half a second at the 1000m mark and by a third of a second at the 1500m mark before stealing it at the finish to win in 6min 58.16, with Australia pair Sarah Tait and Kate Hornsey third in 7.03.98.

New Zealanders Graham Oberlain-Brown and James Lassche just missed out on a medal in the final of the men's lightweight pair's event.

The Kiwis, in lane one, shot out to an early lead but their pacesetting took its toll and they faded to fourth behind Great Britain, Italy and Germany.

Nathan Cohen and Joseph Sullivan will tomorrow (Friday) get a prime centre lane in which to defend their double sculls title after easily winning their semi-final tonight.

The two New Zealanders were far too good for the rest of the field and won with almost three seconds to spare over Slovenia and France.
Cohen and Sullivan got into their work after narrowly trailing the Estonian duo at the 500m mark. They were just ahead of Slovenia at the halfway mark but powered away to win in 6min 16.68sec.

Iztok Cop and Luka Spik delighted the home crowd by holding on to second in 6.19.25, with Frenchmen Cedric Berrest and Julien Bahain third in 6.19.74.

Grant, a three-time world champion, was second behind Freeman-Pask at the 500m mark before using a superior stroke rate to pull away. At the halfway stage he led the Brit by over two seconds, with Ruta making his move in the final 1000m.

The New Zealand men's eight finished a disappointing fourth in their B final.

Nicholas Pusinelli, Tyson Williams, Adam Tripp, Tobias Wehr-Candler, Ian Seymour, Sean O'Neill, Hamish Burson, David Eade and Ivan Pavich had hoped to take out the race in order to qualify directly for next year's London Olympics, but could not recover from a slow start, although they did hold second place in the final stages before fading. The Czech Republic beat them to third on the line with New Zealand three one-hundredths of a second behind.

The Kiwis had surprised many by qualifying for the final of last year's event, couldn't repeat the feat after finishing sixth in their semifinal.