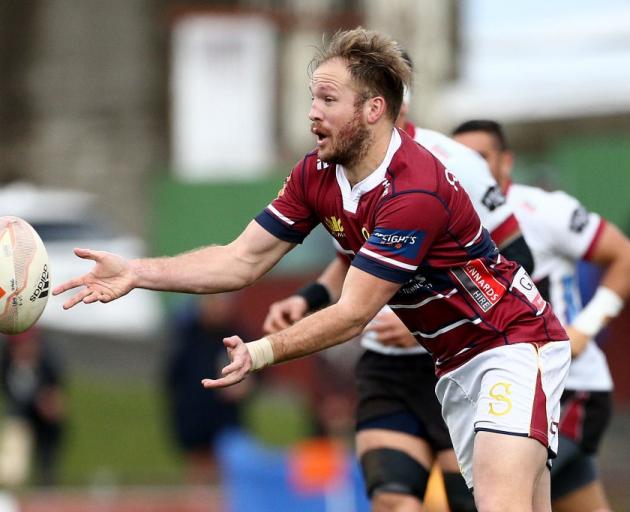 Marty McKenzie in action for Southland earlier this season. Photo: Getty Images
Southland has joined the club and opted for dual playmakers for its match against Hawke's Bay in Napier tomorrow.

The All Blacks have gone that way with Beauden Barrett shifting back to fullback, so Richie Mo'unga can slot into the first five-eighth slot.

The Stags have followed suit. Marty McKenzie, who has recovered from a head knock he sustained in the 33-12 loss to North Harbour, will start at fullback, while Scott Eade will remain in the No10 jersey.

Eade provided back-up for McKenzie earlier in the campaign. But he has made some nice touches and coach Dave Hewett wants both players in the side.

''You could draw a comparison there but that is probably where it ends,'' he joked.

''But having two guys that communicate well and can run a game is what we are trying to achieve out of that.''

It has meant a reshuffle at the back. Regular fullback Josh Moorby has shifted to the right wing, while Isaac Te Tamaki moves in one space to centre.

Te Tamaki has been one of the best performed Southland players but missed the last game through rotation.

''Again it was about getting the best players on to the field. Josh would have preferred to play at fullback but ... he will largely be doing the same type of work as if he would if he was at 15.''

Te Tamaki has played at centre before but ''not for a wee while''.

''The great thing he brings is a lot of enthusiasm and a lot of communication which is an area we've been working on.''

There is still no sign of robust openside Phil Halder. He has been missing since the Ranfurly Shield challenge.

He took a blow to the head in that match and is going through the return-to-play protocols.

Greg Pleasants-Tate gets the start at hooker ahead of captain Flynn Thomas, which means blindside flanker Brayden Mitchell will lead the side.

Thomas has had a heavy workload but equally Pleasants-Tate has been pressing for a starting spot.

Halfback Logan Crowley returns to the run-on side after Jay Renton produced a lacklustre performance in the 80-0 drubbing against Canterbury in Christchurch on Saturday.

It was a one-sided encounter the Stags are keen to put behind them quickly. The side has not won a Mitre 10 cup game in nearly three years.

Hawke's Bay will present another stern challenge for the beleaguered side. The Bay has three wins and a draw from four games and leads the Championship standings.