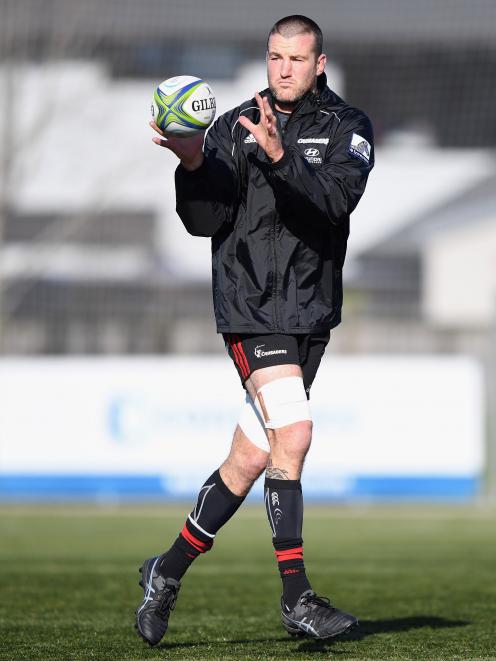 Ainley will turn 39 later this month and he is still part of Super Rugby — now as a member of the Crusaders squad, having joined the team as injury cover for All Black Scott Barrett.

The lock played for the Highlanders for four years and was part of the side which won the title in 2015.

Then 33, that may have been it for Ainley.

But he continued to play, taking part in the victory over the British and Irish Lions two years later, before finishing up after the 2018 season, having played 40 games for the Highlanders.

‘‘The Highlanders said to me at the end of 2018, go away and play some Mitre 10 Cup for Tasman and we’ll have a look at you. But I picked up a niggly calf injury — quite sore — and didn’t end up playing much,’’ he said.

‘‘So they didn’t re-sign me, which was fair enough, and I thought that was it. So I hung up the boots, we moved up to Tauranga and I had no plan on playing.

‘‘Then a mate dragged me along to play some club footy and one thing led to another.’’

He ended up being picked for the Bay of Plenty side which got on a roll and won the Mitre 10 Cup championship last year, winning promotion to the premiership.

Then with Crusaders forwards Luke Romano and Ethan Blackadder picking up injuries the phone rang and he was called into pre-season for the Crusaders late last year and played some warm-up games for the side.

He then went back to Tauranga, but when Barrett went down he answered the phone again.

‘‘I’ve retired about five times, I think. But they keep calling and I keep coming.

‘‘I still enjoy it. There is a bit of a shortage of locks around. A lot of tall, young guys these days go and play other sports, so that has helped me.’’

Ainley also started his career a bit later and spent time in Europe and Japan when younger, which made his body last longer.

He felt he was still matching his younger colleagues on the training field and working hard to maintain his fitness.

‘‘Physically the body feels good. At training it is just keeping up with the boys and pushing a few of them. I do not feel like the old guy.’’

Ainley was comfortable with the fact he may not get to play any games but was ‘‘expecting the worst and hoping for the best’’.

Whatever happens over the next month and a-half for him and his family — wife Michelle and children Emilia (10), Kaiya (8) and Baxter (6) — the finish line was not far away.

‘‘The family is going to be moving back to Nelson in a couple of weeks and then I’ll go back up there and that is rugby for me. I’ll hang up the boots for good. Well, that is the plan, anyway.’’