MacLeod not convinced about competition’s format 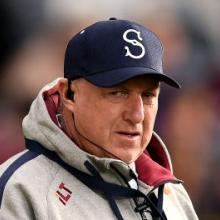 Dale MacLeod
Southland coach Dale MacLeod did not hold back when asked for his thoughts about the new format for the NPC this season.

The two-tiered Premiership-Championship system has been abandoned in favour of a conference system with every team playing for the top prize.

MacLeod is a firm critic.

"Look, mate, I think they’ve got that wrong," he said.

"I don’t see what they are trying to create.

"You get a couple of [Championship] teams that might have gone well last year, but I guarantee they don’t have the same impact this year when they have to play the good [Premiership] teams week in and week out."

Southland opens its NPC campaign against Tasman in Blenheim on Sunday.

MacLeod said the Stags were determined to make the playoffs, but facing the top sides more often was going to be an enormous challenge for the smaller provinces.

"Don’t get me wrong, we’re going to have a crack.

"But let’s be honest, when you’ve got teams with 20 or 25 Super Rugby players, and we’ve got 30 club players from Invercargill, these aren’t excuses but it is a reality."

He felt the previous format worked well and he expressed concern the NPC could become an arms race where the unions were tempted to overspend in the pursuit of glory.

"The best teams spends the most money. It has always been that [way]."

Tony Lamborn’s absence will be sorely felt in the back row, and fullback Josh Moorby’s departure is a blow.

Hooker Greg Pleasants-Tate broke his ankle during a club game and is unlikely to feature for the Stags this season.

But those losses have been partly offset by the arrival of Highlanders utility back Scott Gregory and the return of experienced campaigners Josh Bekhuis and Robbie Robinson.

Bekhuis will captain the team, which by and large has a settled look.

MacLeod said the squad included 30 players who had all played club rugby in Southland this season, so it was tight-knit.

"But we don’t carry a lot of depth and we can’t afford to lose too many players and that is one of the challenges," he said.

"We are probably a couple of loose forwards light ... until we get everyone back on deck."

One of the players MacLeod is expects to shine this year is New Zealand under-20 flanker Hayden Michaels.

Michaels has inked a three-year deal with the Highlanders from 2024 and is highly regarded in Southland.

Outside back Solomon Alaimalo took a break from rugby for the best part of a year but is set to return for Southland this season and will add some much-needed potency.

"We’ll need things to go our way, but what I saw in this group last week against Tasman I was really pleased with."