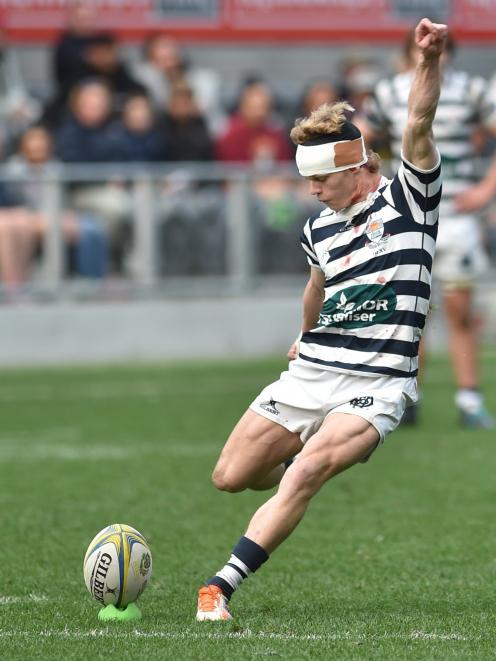 Without the heavy bandage and the blood, the 18-year-old Otago Boys’ High School first five is interchangeable with any other teenage boy.

He is not particularly big. He is quietly spoken. You would have to dig deep to get him to reveal much about himself.

But this year 13 pupil has something special. He has the ability to sum up a match in a nanosecond and make the right decision.

That is a very fine attribute for a first five to possess.

Just over a month ago he provided a grandstand finish to help guide Otago Boys’ to a tense 26-24 win against Southland Boys’ in the final of the Otago Premier Schools competition at Forsyth Barr Stadium.

The visitors had rallied and led 24-23 with a couple of minutes remaining.

The match looked like it was slipping way until Hurley potted a late drop goal.

Earlier he got stood on and had to leave the field to find a way to stop the bleeding. When he returned, he looked every bit like Bert Sutcliffe with tufts of blond hair sticking out the top of his blood-soaked bandage.

It made for quite a sight when he wobbled over the drop goal. It also made for a compelling narrative for the match.

‘‘We had the penalty advantage so I thought I may as well have a crack,’’ Hurley said, reducing the drama of the moment to a simple calculation.

But it cannot be easy to think straight when you are tired, under pressure and have several behemoth loose forwards tearing towards you.

And it was not something he had practised a lot either.

‘‘Not a lot really, just every now and then. When you are going into a final it is something you think you might need and we did actually need it in the end.’’

Certainly did. But when said kick left his boot, he was not at all sure the ball would behave.

‘‘It started a wee bit left and started bending right and I thought it might be close. I wasn’t sure if it had gone over.’’

It had but the celebrations needed to wait.

‘‘You look up at the clock and realise you still have to finish it off. It wasn’t all over just then.’’

Otago Boys’ held on to win and the reward was a spot in the South Island final.

They will host Nelson College at Forsyth Barr Stadium this afternoon.

Hurley hails from Gore. He transferred to Otago Boys’ in 2019 and arrived with a reputation as a very good cricketer and rugby player.

His father Sean Hurley was a handy outside back and played eight games for Southland between 1993 and 1995 and two for North Otago in 1999.

Hurley is unsure whether he will continue playing cricket. He has played Hawke Cup cricket for Southland and scored a century for Otago Boys’ at Gillette Cup level, so he has an agonising choice ahead.

But given his selection in the New Zealand Schools rugby side, his cricket career might be crease-bound for now.

His immediate focus, though, is on helping Otago Boys’ defeat Nelson College.

‘‘They are quite an attacking sort of a side and will look to throw the ball around. It should be a good battle.’’