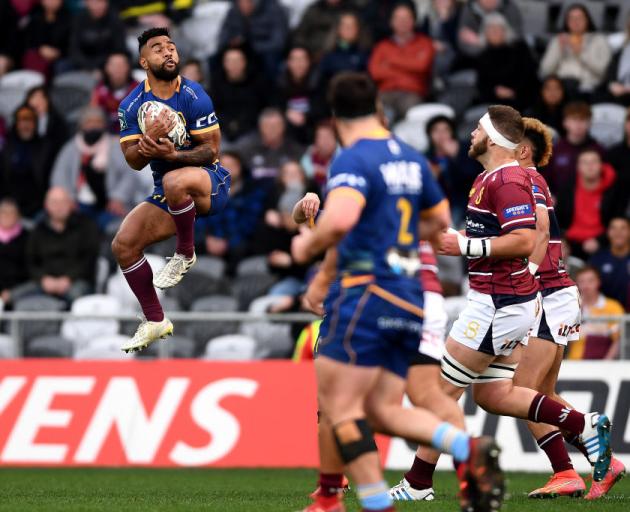 Otago winger Jona Nareki takes a high ball during an NPC game against Southland at Forsyth Barr Stadium last year. He ruptured his ACL later in the game. PHOTO GETTY IMAGES
Jona Nareki is back doing what he loves — flying towards the corner flag.

It is almost a year to the day since the 24-year-old Otago winger ruptured his anterior cruciate ligament.

The talented outside back was fresh from a tremendous season for the Highlanders and was expected to have a big impact in the NPC.

But in game one against Southland, he took a tumble while returning the ball. His knee had given out underneath him and that was his season done.

He needed surgery to repair the damage and also missed the Super Rugby season. It was the first major injury of his career and it has been a long year.

Nareki made his return a couple of weeks ago with a 20-minute shift in a pre-season game against Southland in Invercargill.

His workload doubled against Canterbury on Saturday. He played in the opening half and looked every bit the exciting winger he was before the injury.

He scored a tremendous try in the corner. Nareki acrobatically propelled himself towards the line and reached out to score.

He was quite literally flying towards the corner flag. Gravity eventually won the battle but Nareki got the ball down.

It was a wonderful sight for Otago fans and a good feeling for Nareki.

"I’m definitely confident with my knee because I know what I’ve done leading up to my return," he said when asked if he was hesitant at all.

"I know that it is strong ... and mentally all I need to do is get through that and let go. In the 40 minutes I had against Canterbury I didn’t even think about my knee once, which was great.

"It is my planting foot as well, so there is a lot of force, especially with my weight now."

But actually he had planned to add more weight to help him shake off some of the blows you take at the top level.

"Hopefully it is all muscle and not the fish and chips I have on a Friday night," he joked.

"But when I was playing with the Highlanders, I was getting heaps of knocks on my shoulders and one of the factors was I was too small. I just didn’t have the composition to absorb the hits."

He is unsure whether the extra weight has slowed him down as he has not been tested yet. He is keen to find out himself.

Nareki is pleased with his progress since making his return, though. The 40 minutes he got against Canterbury was just what he needed and he is "fizzing" before the opening game against Counties-Manukau on Saturday afternoon.

He is part of a quality Otago team that includes 23 players with Super Rugby involvement.

"I feel like Otago is in a great spot for the next few years.

"I rate the young players that are coming in like Oli Haig and Fabian [Holland] and Cameron Millar at first five."

Nareki shapes as a key player, though. If he can recapture his form from 2020, it could be a good year for Otago.