Otago under-19 well prepared for season ahead 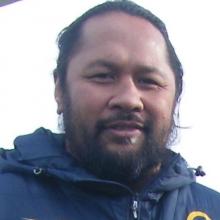 Seilala Mapusua
Otago under-19 will not lack for preparation when the side gets into its work tonight and when the serious stuff begins next week.

The side thrashed Southland 95-0 in a warm-up game in Balclutha last weekend and is playing a Sassenachs Colts team in Lawrence tonight.

The team is again coached by Seilala Mapusua, who has had the players working hard and in training programmes since February. They had worked those programmes in with the club competition and also talking with club coaches.

Mapusua said it was one of the learnings he had picked up from last year.

"We didn't do this sort of thing last year and we noticed it around the physical preparation of the players," he said.

"You are coming up against sides from Canterbury and teams from the North Island and they are well organised, physically big and have been involved in fulltime programmes from the start of the year.

"That is the landscape of New Zealand rugby now. To be competitive you have to do this sort of stuff."

He said extensive research had been done on players and he was confident no player had been overlooked.

The side finished 10th last year at the national tournament in Taupo but has more size this year which is a plus.

Backs Bob Martin and Harrison Boyle are back from last year.

Big Harbour prop Saula Ma'u is contracted to the Mitre 10 Cup side but will make an appearance for the under-19 team.

Mapusua said there were plenty of premier club players in the team which was a bonus as they were used to playing at a high intensity.

The side will be captained by University loose forward Sean Withy.

The three regional games the team plays were vital for how it performed at the national tournament, Mapusua said.

The team is grouped with Southland, Tasman and Canterbury in a South Island pool to be played over the next three weeks.

The top two sides will go into the top eight at the national tournament at Taupo.

Tasman is the first opponent next Saturday, followed by Canterbury on August 24.

Both these games will be played in Christchurch.

Southland will be the opponent on August 31 with the tournament in Taupo on September 8-15.

Tasman and Canterbury are expected to be tough with the side full of players linked to the Crusaders academy which has bases in Christchurch and Nelson.

The squad will be trimmed to 25 for the tournament in Taupo.