Otago's latest recruit feeling the cold after stint in Singapore 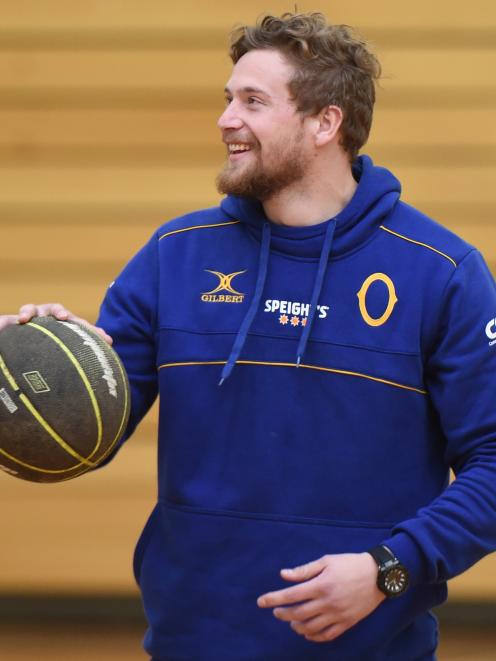 New Otago import Louis Conradie training at the Edgar Centre yesterday. Photo: Gregor Richardson
It is hard to miss Louis Conradie - at 2.04m he stands out in the crowd.

However, Conradie (23) would rather people notice him for his exploits on the rugby field.

Conradie is from South Africa, and has arrived in the country via Singapore to help boost the locking stocks of the Otago team.

With Tom Rowe playing in Japan and Josh Larsen based in the United States, Otago was in need of some tall timber.

Conradie was playing for the Asian Pacific Dragons, where Otago players were also playing under Otago assistant coaches Ryan Martin and Lee Allan.

Conradie said he was keen to come to New Zealand and Otago coach Ben Herring had got hold of him, seeing if he was interested.

He went to Paul Roos Gymnasium, a school that has produced more Springbok internationals than any other, and then played Varsity rugby, followed by a stint with the Cheetahs in the Currie Cup.

''But everything was sort of falling apart in South Africa, so I decided to head overseas. From there I went to Singapore. In South Africa, with the finances, the unions are struggling a lot and cutting a lot of players,'' he said.

He had enjoyed Singapore and was keen to keep travelling.

He jumped at the chance to play for Otago and was enjoying the New Zealand experience so far.

''Against Tasman, they are a very good side and had a sound defence. It showed where we want to be and at that level in terms of attack and defence. It is a lot different than South Africa.

''They don't really do the skill set part of the game. The coaches do not really work individually with the players, while over here they work individually quite a lot. I think I have learnt a lot already since I have been here.''

Conradie had a false start to his time in Dunedin when he cracked his sternum in a game just after he arrived.

''There was a crack in my joint, right in the middle. It is a joint there but it is not supposed to move. But it came right and is good now.''

Conradie said his team-mates were schooling him up on the Ranfurly Shield and what it meant to people.

''The boys have been telling me about it a lot and I have been hearing a lot about it. We don't have anything the equivalent of that in South Africa.''

He is flatting with Taieri team-mate Mitchell Scott, who was also his room-mate in Singapore. Scott is out for the season with a pectoral injury.

Getting used to the winter chills of Dunedin is not easy for a South African who was living in Singapore.

''The first few trainings I had to get on the bike for 10 minutes to warm up as I was not used to it. But now I am getting used to it.''

Conradie, who was born in Pretoria, grew up in Cape Town and played for two years in Bloemfontein, said his height was inherited.

''My dad is quite tall. But only 1.91m. No-one in the family is extremely tall. But I think my grandmother's parents were quite big people in general.''