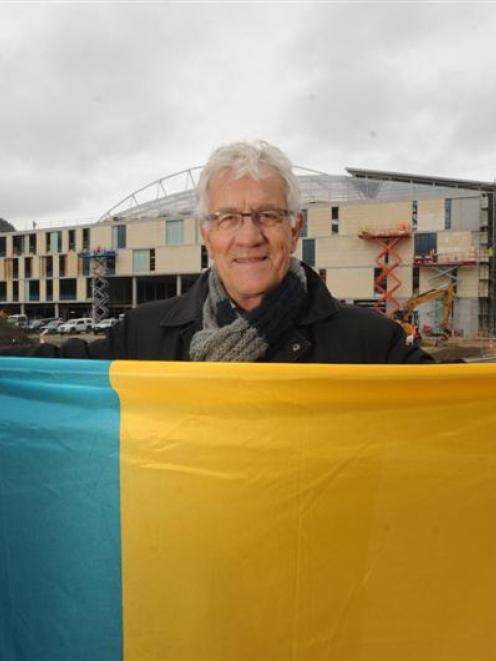 Manager Robert Antonin proudly displays the Romanian flag at the Forsyth Barr Stadium yesterday. Photo by Peter McIntosh.
Rugby may be considered a minor sport at home but Romania is still able to compete above its weight in the European Nations Cup.

Romania will be competing in its seventh Rugby World Cup this year and team manager Robert Antonin visited the Forsyth Barr Stadium in Dunedin yesterday during a week-long visit to New Zealand.

Romania has long been considered as one of the stronger European teams outside the Six Nations and has won the European Nations Cup four times since it was introduced in 2000.

There is a New Zealand link to the team because former All Black prop Steve McDowell is the assistant coach and fitness adviser of Romania.

Interest in the Rugby World Cup in Romania is minor compared to the Football World Cup when it was held in South Africa last year.

"The people are more interested in soccer than rugby," Antonin said. "Rugby only attracts between 5000 and 8000 spectators when international games are held at home."

Rugby is a minor sport in Romania compared to football, and there are only 8000 players in the country. But the sport is growing.

The number of elite clubs was reduced from 12 to eight last year in a bid to keep the best players in Romania, instead of playing in France and other countries.

"In the last 20 years a lot of the best players went to France and some to Italy and England," Antonin said.

"The policy of the rugby union is to keep the players in the country but to do that, it is necessary to create a good competition."

Romania has competed in every Rugby World Cup and has won one pool game in the six completed world cups.

The national team is now at the crossroads.

"We will lose some experienced players but have promising young players who are not experienced. But in the future we will be better."

Antonin, who has been manager or coach of the Romanian team since 2007, came into the job after holding important positions in French rugby.