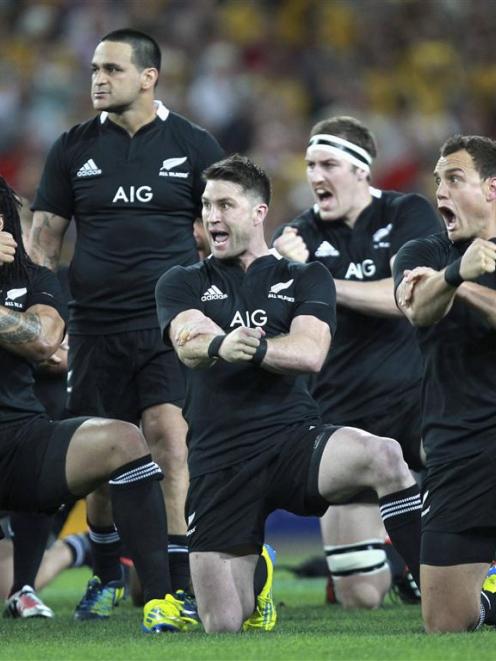 The All Blacks now have AIG on their jersey. REUTERS/Jason O'Brien
The New Zealand Rugby Union sponsorship deal with AIG is understood to be worth around $80 million.

The 5-year deal, worth approximately $15m a season, was divulged at a meeting with the All Blacks senior leadership group before being made public without the dollar amounts last month.

In New Zealand sports, it is second in value only to the All Blacks' contract with adidas.

The NZRU earned $80m last year from commercial deals, 80 per cent of its income, as businesses clamour to align themselves with the world champions of a sport some believe is developing into a truly global one.

Both AIG and the NZRU are bound by strict confidentiality clauses and refused to discuss what the deal was worth.

University of Canterbury branding expert Ekant Veer said the NZRU could have held out for more money.

"I'm surprised the NZRU would be altering 140 years of heritage for $15 million a year. We have this incredible history of the All Blacks and we don't like it when people come in and try to buy our shirt."

AIG New Zealand chief executive Cris Knell said age-group and woman's rugby could be the top beneficiaries of the extra cash flowing through the NZRU's coffers.

Knell, an Irishman who played club rugby into his adult years, said that AIG's global reach would ensure the sport's profile gets a boost.

The company had a big presence in countries such as Russia, Romania and throughout Asia, where rugby's popularity was growing.

He indicated that AIG wanted to see the national teams play in new territories.

"We would never put the All Blacks up against a tier two nation. But I would love to see the Maori All Blacks play against someone like Japan, and that's something within our grasp."

Knell said the deal with the All Blacks was about redemption - as the company successfully battled back after a $180 billion bailout from the US Government.

NZRU chief executive Steve Tew said he had been pleasantly surprised by public reaction to the deal.

This was partly due to an effective PR campaign by the NZRU, which included Tew personally calling former All Black legends to give them warning.

"I think most of the ex-All Blacks said they would rather there just be a Silver Fern on the jersey and leave it at that. I personally rang and told a few of them. I said we live in a world where that isn't a realistic goal anymore. They said if you are going to do it well, you will have my support."

After the deal was announced, media calls to the same legends - men such as Colin Meads and Brian Lochore - found muted support for the move.

The AIG $80m deal is dwarfed by the big sponsorship deals in football. Manchester United will reap $96m from its new deal with GM.

AIG has ordered 62,000 jerseys for staff - and others will be in stores next May.