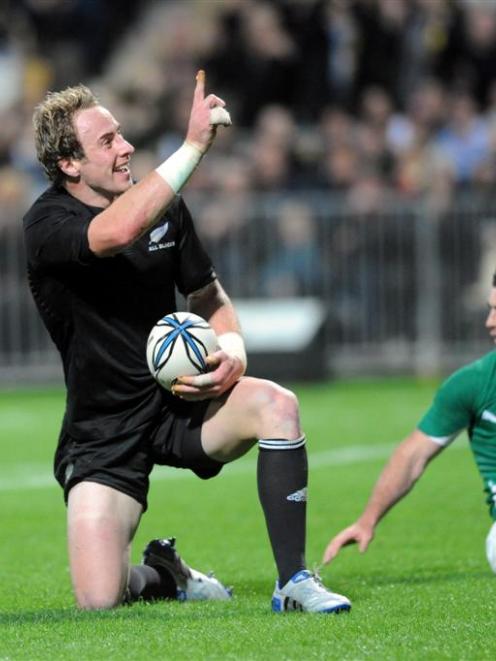 Two years after they posted a century of points against Samoa at the same venue, New Plymouth fans were treated to another scoring feast as the All Blacks raced in nine tries to four.

Standout centre Conrad Smith, halfback Jimmy Cowan and debut lock Sam Whitelock each scored two tries while 22-year-old fullback Israel Dagg was a star on debut, with a hand in three of the All Blacks' five first half tries.

It was a record score against Ireland -- beating their 63-15 in Dublin in 1997 -- but was short of the record margin of 59-6 in Wellington in 1992 thanks to a late Irish fightback with three second half tries.

First five-eighth Dan Carter kicked eight from eight for a 17-point haul -- bringing up 1000 points in his 67th test -- before he made way for debutant Aaron Cruden in the 54th minute with the match in the bag.

The contest was virtually over when one of Ireland's best players -- No 8 Jamie Heaslip -- was red carded by English referee Wayne Barnes in the 15th minute for an apparent knee to captain Richie McCaw's head.

Then, Irish pivot Ronan O'Gara was sinbinned by Barnes in the 24th minute when he held back another All Blacks standout Cory Jane at a chip and chase near the line.

With 13 opponents, the All Blacks were dominant up front and raced in for three tries. By the time O'Gara returned it was 38-0 just before halftime.

On a pitch dampened by heavy rain it was a huge contrast from the All Blacks' jittery season-opening defeat to France a year ago, although Ireland offered little resistance and their defence had plenty of holes.

The three All Blacks debutants were impressive, with Dagg making an arrival akin to Christian Cullen's against Samoa 14 years ago.

Prop Ben Franks was excellent as he crossed for a try on debut and offered some big defence while Benson Stanley was solid in the midfield in between generals Carter and Smith.

Coach Graham Henry was able to empty his bench early with the result beyond doubt.

Flanker Victor Vito, Whitelock and five-eighth Cruden had their debuts either side of halftime, with Crusaders giant Whitelock crossing for a try with his first touch in the 51st minute.

It was always going to be an uphill battle for Ireland who hadn't beaten the All Blacks in 22 tests spread over 105 years, and made their 30-hour journey less than a week ago.

There was another pre-test setback when 102-test veteran prop John Hayes withdrew due to illness, and was replaced by Tony Buckley.

Playing in his home town, Smith crossed first 10 minutes in when Irish hooker Sean Cronin knocked on, the All Blacks swept on to counter attack and Smith kicked through and beat a fumbling Rob Kearney to the ball.

Ireland went close to replying when midfielder Gordon D'Arcy was held up, but the wind went out of the tourists' sails as soon as Barnes spotted Heaslip's indiscretion at the ruck.

The debutants combined for New Zealand's second when Stanley's in-pass sent Dagg away and the impressive Kieran Read crossed out wide.

Dagg created the All Blacks' next two tries to Ben Franks and Cowan with strong running and slick offloads, before Cowan crossed for his second from a Carter break.

When O'Gara returned, Ireland stunned the All Blacks with a try from nowhere to reserve Dan Tuohy, who darted through a ruck to make it 38-7 at the break.

Smith's second and Whitelock's debut touchdown made it 52-7 but the Irish heads didn't drop, with captain Brian O'Driscoll and Tommy Bowe crossing in the space of five minutes.

But normal transmission resumed with the entire All Blacks bench on the field, with reserve prop Neemia Tialata diving over to halt any thought of an Irish fightback.