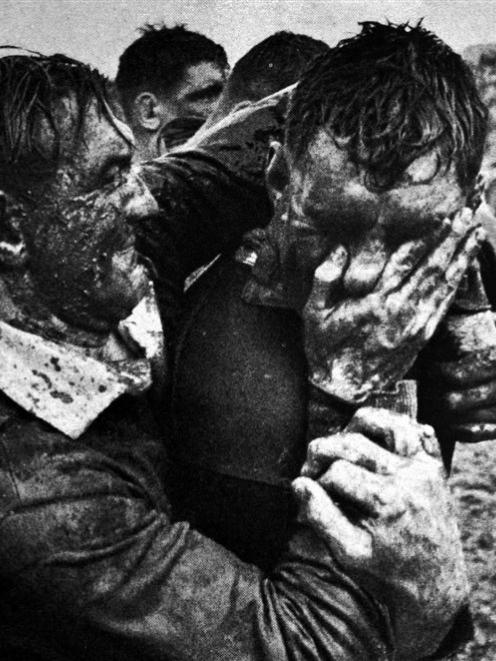 Springbok centre John Gainsford smears mud into the face of Colin Meads during the first test at Carisbrook in 1965. The All Blacks won 13-0.
Few people have seen more test rugby at Carisbrook than Brent Edwards. The columnist and former long-serving Otago Daily Times sports editor looks back on some famous games at a famous ground.

There are much bigger and better rugby stadiums around the world but few which evoke the passion and nostalgia of Carisbrook.

It's a no-frills name and a no-nonsense ground. It's smaller than most, the facilities are basic yet it fairly drips with rugby heritage.

• All Black history at Carisbrook

Wherever I have been in my rugby travels, the greats of the game talk of Carisbrook with respect and affection.

It might be Barry John, the great Welsh and Lions flyhalf; the late Kitch Christie, who coached the Springboks to World Cup glory in 1995; or Nick Farr-Jones, captain of the Wallabies who won the William Webb Ellis Cup in 1991.

They have all been affected by the Carisbrook experience. It's small, it's intimate and it breathes the very essence of rugby.

It's 102 years since the Anglo-Welsh played the first test at the ground and it's perhaps fitting that the Welsh - blood-brothers of New Zealand in rugby - should play the last.

My brief is to write of the highs, lows and dramas of Carisbrook tests, and there have been plenty of each.

Carisbrook is where the greatest rugby rivalry of all, All Blacks versus Springboks, began in 1921.

It's where the little Welsh winger, Jack Morley, scored a runaway try in the last play to give Great Britain a famous 6-3 win in 1930.

It's where the late Ron Jarden scored an intercept try to clinch a 10-6 win over the Springboks in the first test of the tumultuous series of 1956.

It's where the late Don Clarke kicked his six penalty goals against the Lions in 1959 and the Evening Star headline screamed: Clarke 18, Lions 17.

That was my first match at Carisbrook and I've been fortunate to watch all the tests in the past 51 years. My father, uncle, cousins and I queued from 9am. Many on the terrace fainted, many vertically challenged patrons saw little of the play, but the experience was unforgettable.

An hour before kick-off, with the risk of spectators being crushed, myself and other youngsters were ushered to a spot in front of the terrace from where we could hear the thud of Clarke's boot.

Who will forget the memorable photograph taken by the late Tom Lloyd, of the Springbok centre, John Gainsford, smearing mud into the face of Colin Meads during the first test in 1965?Or the total dominance of the mighty All Black pack against the 1966 Lions?

"I'd rather die than go through that again," Lions captain Michael Campbell-Lamerton said after the 20-3 demolition?

Or the dramatic test of 1971 when prop Ian (Mighty Mouse) McLauchlan scored his charge-down try and Barry John taunted Fergie McCormick with his tactical kicking as the Lions won 9-3?

Or the behind-the-scenes dramas of 1983 when Allan Hewson left his boots at the hotel and they had to be rushed to Carisbrook with the help of a police escort. Hewson played his finest test and the All Blacks sealed a series win over the Lions?

Or the try scored by Wallaby flanker Steve Tuynman, but disallowed by Welsh referee Derek Bevan, which robbed the Wallabies of victory in 1986?

Who will ever forget the Bledisloe Cup test of 1993 when it seemed that EVERY resident of Otago was involved in some way in the buildup and rugby mania reigned?

That was the first of the Bathgate Park tent villages and the first of the special Saturday night editions published by the Otago Daily Times. The All Blacks and Wallabies were able to read all about the afternoon's test when they sat down to dinner at Larnach Castle.

The Springboks were back in 1994 for the first time since their ill-fated tour of 1981 and, in 1996, the remarkable Christian Cullen launched himself on the world stage when he ghosted through the Scotland defence for four tries.

In 1998, English lock Danny Grewcock became the only player ordered off in a Carisbrook test after he stamped on Anton Oliver's head.

In 1999, there were a record eight Otago players on the field when the All Blacks kept the Springboks scoreless, 28-0.

The 2001 test against Australia was memorable for two reasons. It was the last afternoon test to be played at the ground and the All Blacks lost a test at Carisbrook for the first time since 1971.

The All Blacks launched the Graham Henry era in 2004 with a 36-3 win over England, the World Cup winner the previous year, and in 2005 a try by Keven Mealamu clinched a thriller in a titanic battle against the 'Boks.

And now it is almost time to say goodbye to Carisbrook as a test venue. For many, it's like farewelling a member of the family.

We'll remember Carisbrook particularly for the afternoon tests: the smoke from thousands of cigarettes drifting across the ground, the chants and the roar of the crowd, the heroes whose deeds on the green sward enraptured us in the winter months.

We'll never forget because, as long as the game is played in New Zealand, Carisbrook will be an integral part of the All Black test story.