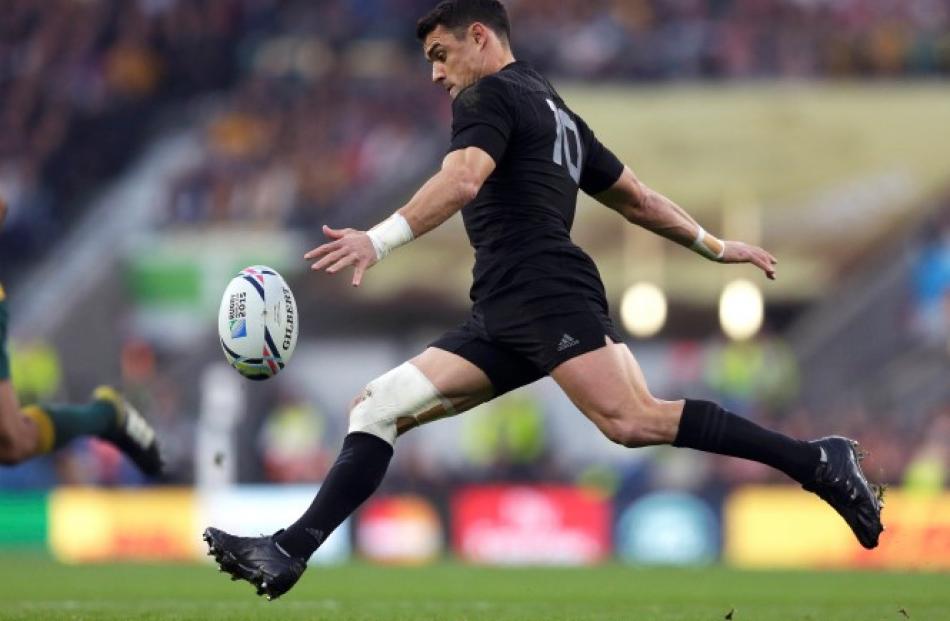 Dan Carter stepped up to play a major role in the All Blacks' victory over the Wallabies. Photo Reuters

ODT Online rugby writer Jeff Cheshire picks out some key points from the All Blacks' Rugby World Cup final win over the Wallabies this morning.

Clinging on to a four-point lead and with Australia beginning to gain momentum, there would have been more than a few nervous fans around New Zealand this morning. But they need not have worried. The All Blacks, as they have done so often over the past four years, showed their ability to close out the game when it was needed. There was no panic, no stupidity and most importantly, no recklessness as they calmly extended a 21­-17 lead to 34­-17 in the final 15 minutes. Being able to do this has been the hallmark of this team since the last World Cup andit was therefore fitting that they should close out the final in the way they did where others may have wilted.

There is not much more left to say about Dan Carter. Up until today the only thing missing from his rugby CV was a dominant performance in rugby's biggest game. Then he delivered a performance for the ages and ensured no stone will be left unturned. If his performance in the second test against the Lions in 2005 was his best, then today's was certainly his most important. With 15 minutes to go, Australia staging a furious comeback and the All Blacks clinging to a four-point lead, Carter came to the fore. He banged over a drop goal from 40 metres out while being in the line, under pressure and having to switch feet.

Then he stepped up and knocked over a kick from halfway to take the score beyond seven points. His general play was tidy and aside from one missed touch, he steered them around the field well. With ball in hand he distributed well, while on defence he made more tackles than anyone else. It was clear how much he wanted this one, on multiple occasions showing just how pumped he was.

There have been plenty of doubts surrounding him over the past four years, but when crunch time came, Carter showed that he is indeed still the world's best No 10.

The physicality on show was evident, particularly early on as the All Blacks got up fast on defence and put in some huge hits to force the Australian attack on to the back foot. Jerome Kaino and Owen Franks set the tone with the All Blacks' first tackle of the match after a kick chase and the rest of the team followed their lead. Consequently the Wallabies struggled to get any forward momentum and found themselves having to use the boot to obtain good field position and apply pressure. As the game progressed the All Blacks began falling off a few tackles, but the early physicality was what enabled such a strong start.

Dan Carter was not the only All Black who had a huge day. Richie McCaw was outstanding, as always. He was everywhere, getting his hands on plenty of loose balls and getting through a ton of work both on attack and defence. Jerome Kaino too was brilliant, putting in some crunching tackles and bringing the physicality that has made him such a feared opponent. Both locks competed well at the lineout and got through plenty of work too, while Ma'a Nonu threatened from start to finish. Ben Smith was dangerous with ball in hand, particularly in the first half, while Sonny Bill Williams had a strong game, making his usual impact, replacing Conrad Smith, who himself was outstanding.

It was almost inevitable that there would be a yellow card in this final. Local boy Ben Smith was the player deemed to have commited the act of foul play, although you have to ask whether it was really that bad. There is no doubt Drew Mitchell was lifted past horizontal in the tackle. Whether Smith was the one who took him past horizontal is another thing.

Smith lifted one leg and drove up, pretty much as you are taught to. Then Michael Hooper came in as the support player, driving Mitchell's upper body down, again just as you are taught to, a means of ensuring the ball carrier is not held up. Yet in this instance when Hooper added his force to the tackle Mitchell's other leg was lifted off the ground and his body went past horizontal.

Is that really Smith's fault? Had Hooper not been involved, Mitchell most likely would not have gone past the horizontal. So how do you justify carding Smith and not Hooper? Both seemed to be involved in what was deemed to be a dangerous tackle.

David Pocock has been outstanding all tournament and much of the pre­-match talk revolved around how to shut him down. But today he had nowhere near the influence he has had on past games. At times it seemed the All Blacks were trying to play the game away from where he was, often passing to the opposite side of the ruck, making it hard for him to get there. But more so was the fact that he is a player who likes to pick his opportunities and on this day they just did not present themselves as often as in others. If anything Michael Hooper was more prominent in the scavenger role, while Richie McCaw outplayed both of them.

The All Blacks' lineout was slick all day and they utilised their clean off the top ball well, often looking to crash in the midfield and set up an attack from there. On the Wallabies' throw they were equally good at competing, getting up and either stealing or disrupting the ball, stemming that source of possession. Likewise the scrum held up well and made a mockery of the much talked about improved Australia scrum as they pushed them off the ball at one stage in the second half.

There were a few key moments in this game, notably Carter's two late kicks, but Ma'a Nonu's try will surely be remembered among the great All Black plays. After receiving the ball from Sonny Bill Williams with nothing seeming to be on, Nonu showed his strength to break the line, then his speed and ability to change direction to beat the cover on the outside. It was an outstanding individual effort that really put the All Blacks in control.

The first half saw the All Blacks have all the possession and territory. If anything the 16­-3 halftime scoreline flattered the Wallabies, who were forced to make tackle after tackle to keep the All Blacks out. The All Blacks constantly found space up the right wing, which saw Nehe Milner-Skudder make a number of good runs and it as there that they would eventually score their first try.

Meanwhile, Australia hardly fired a shot, being met with a brick wall everytime they tried to run it back, often going nowhere on attack. Everything pointed to the All Blacks running away with it in the second half, although the Wallabies found their fighting spirit and worked their way back into the game.