Rugby: Not time to panic, but are ABs playing it right? 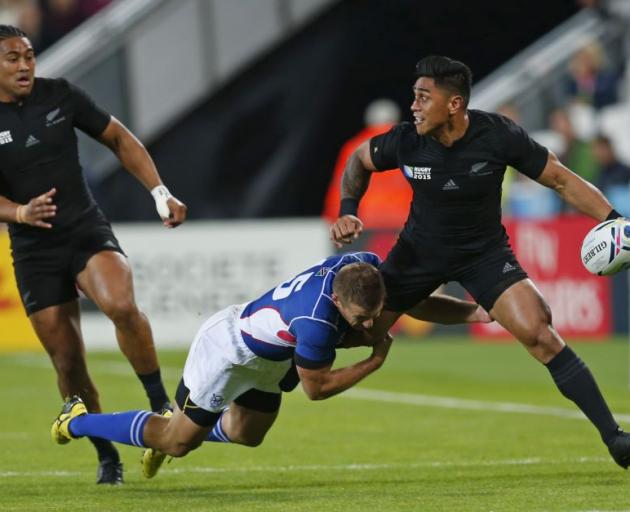 Steve Hansen says they are holding back. That is not hard to believe either, they have kept things pretty basic.

It has been easy to frustrated by the All Blacks performances so far during this World Cup. Dropped balls, poor passing and general lack of creativity has seen them struggle to click in the way many expected they would.

That they are holding back tactically is obvious. Indeed, there hardly seems to be a tactic at all.

The past two matches have seen them play a very flat and lateral game, putting themselves under pressure and not doing anything to cause the defence problems. There was no thought to play a tighter game, using some pick and go or forward runners to create go-forward or draw the defence in.

They constantly looked to go wide early, meaning the defence was not having to reorganise itself and was rarely on the back foot, meaning they could get up fast and have the field covered. That makes it pretty hard to breakthrough, even if you are as deadly as Waisake Naholo or Nehe Milner-Skudder.

When it comes to crunch time, expect a more structured approach. The tactics they used against Australia in Auckland and against Argentina in the first World Cup game are probably more representative of we are likely to see.

In those games they did play the tight game before opening up. They were not catching and passing at the line so regularly and showed their intention to crash the ball, then implement a couple of quick hit-ups in before spreading the ball.

Against Argentina they were not quite so consistent in doing this. At times they preferred to go wide early, but showed enough to suggest that they are not as one-dimensional as they are playing. That the score remained close in that game was indicative of how well Argentina played and that they will be a threat as the tournament progresses.

Tactically speaking their best game of the year was at Eden Park against the Wallabies. On that night they brought a measured approach with ball in hand, playing a game which limited the pressure they put themselves under, but kept applying pressure of their own. By the end the Australians had no answer.

In that game we saw that this All Black team still has what it takes. Handling errors were not a problem, they were manipulating the defence well and Dan Carter was getting plenty of good ball to work with.

The current helter-skelter gameplan of trying to speed the game up as much as possible has not worked, but is that really a surprise? There is probably no team in the world that could consistently stay error-free while playing the whole game at the line with a lack of forward momentum. The flow-on of that is that the game then slows down, with the constant mistakes creating stoppages for scrums, which allows the opposition to rest and keep up their intensity.

From that perspective, it is probably premature to panic, particularly considering the All Blacks still won their past two games comfortably.

A better question would be why do they feel the need to be so secretive? Are the coaches fears of being worked out legitimate, or are they being paranoid?

The idea of wanting to practice playing under pressure seems logical enough. But all we seem to have found out from that is that they cannot do it very well. That has to be a concern.

Even more of a worry is the lack of in-game practice the players will have had at playing within the systems they are trying to hide. That they are so intent on not showing their hand too early suggests that they are deviating from what they have done in the past. You want to be polished in whatever you are doing, but that is hard when you haven't been doing things against a live-opposition. The instinct and natural feel for what is happening and where people are can be missing.

If it turns out okay there will be no questions asked. If it does not, it would seem to be a huge blunder. Perhaps it is just a risk you have to take to win the World Cup. The selectors certainly seem to think so.

But are they over-thinking it?

They have used more or less the same tactics over the past four years and only lost three times. It did not seem to matter that they were recycling a lot of the same ideas. Teams were struggling to beat them, even if they were figuring them out.

Of course you do not want to become completely predictable. You want to keep a few moves up your sleeve, while also retaining the ability to react to the situation at hand. But surely changing your entire pattern of play in a game that really matters is a step too far.

Either way, time will tell. It is not worth panicking yet. The problem seems to be a tactical one, rather than a personnel one and if that is intentional, you have to give them a chance.

They have done what has been needed so far, if not as convincing as we would like. Now it is over to them to show that they do indeed have what it takes to win this World Cup.