Rugby: Popoali'i in; Breen at fullback 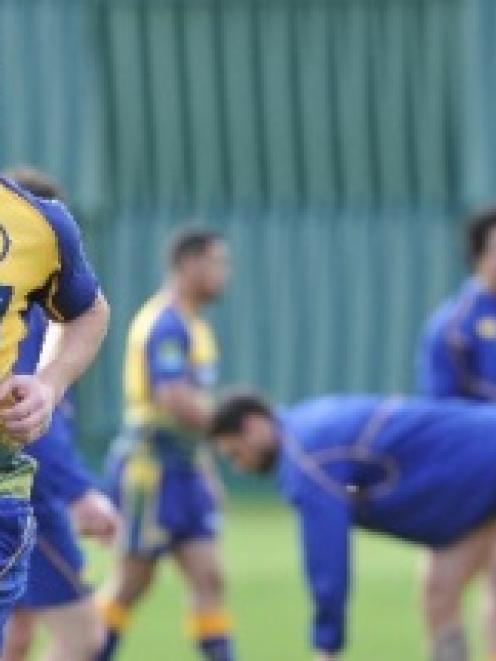 Otago captain Paul Grant trains at the University Oval this week. Photo by Craig Baxter.
Otago has made just two changes to its side, both in the backline, as it gets ready to go into rare territory - a Ranfurly Shield defence.

Coach Tony Brown has shifted Peter Breen to fullback from second five-eighth, after Tony Ensor suffered a shoulder injury in last week's victory. The electric Buxton Popoali'i comes into the side on the left wing, replacing Fa'asiu Fuatai, who moves to the reserves.

To accommodate Breen's move to the custodian role, Michael Collins shifts into second five-eighth, with Jayden Spence coming into the team at centre.

Spence came off the bench last week to make his first appearance of the season and is a key for the Otago backline.

There is no change in the forward pack, with impressive blindside flanker Gareth Evans forming a strong loose forward trio with Lee Allan and captain Paul Grant.

Brown has withstood the temptation of starting with the rampaging TJ Ioane and he will again be expected to come off the bench and make an impact in the second half.

It is a role ideally suited to the bruising Ioane, and his ability to break a game open in the second half is a real asset for Otago.

Breen does not have the blinding speed of Ensor but is a talented player. He can run into holes from fullback and his boot is bound to be used to advantage by the Otago team when trying to clear its line.

Brown has again stuck five forwards on the bench, but this creates few issues, as many of the Otago backs have the ability to play in more than one position.

The side has put the jubilation of the Ranfurly Shield challenge behind it and has concentrated on the game against a talented Hawkes Bay side.

The Bay side is yet to be finalised but has some good players throughout its team, especially in its backline.

Former All Black winger Zac Guildford will seek to team up with New Zealand sevens international Gillies Kaka, while Andrew Horrell is a classy player who shines at this level.

The side has two Super 15 players to call on at halfback with Alby Mathewson likely to start and Chris Eaton in the reserves.

Ben Franks has been made available for the Magpies, released from All Black duty, but is yet to play a game for Hawkes Bay and may take a while to get up to speed.

Former Dunedin loose forward Mark Atkins has shone in the two games Hawkes Bay has played so far and has the ability to appear all over the paddock.

Hawkes Bay easily defeated Manawatu in the first game of the ITM Cup in Napier, winning 45-18, and then lost 24-20 to Bay of Plenty in Mt Maunganui last Sunday.