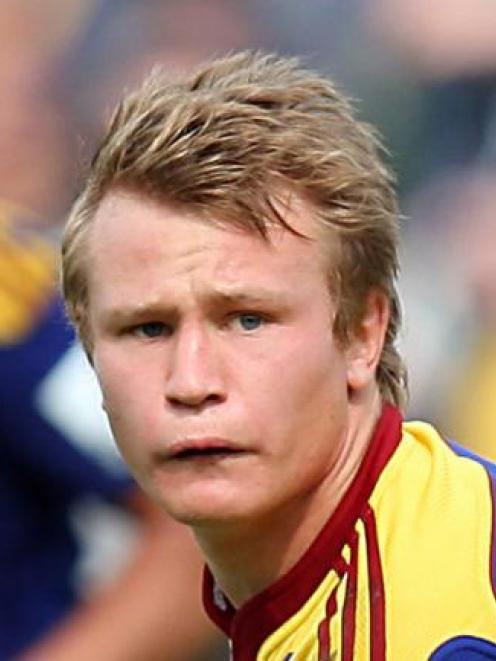 Robbie Robinson.
Highlanders utility back Robbie Robinson has his feet firmly on the ground as he contemplates the Super 15 rugby challenge of the Crusaders in Nelson tomorrow night.

Robinson, who will start at fullback in an injury-hit and reshuffled Highlanders backline, is his known harshest critic.

"It started out not too badly but, when I got the chance to start there were too many errors and going away from the gameplan. There were things I did which didn't benefit the team.

"I'm still looking to rectify those things and put a good allround performance on the field.

"I want to start playing complete games -- none of this throwing balls away or losing possession sort of thing. I want to minimise those, get more game time and eventually cement a spot in the starting lineup. You've got to play well to do that now because there are a lot of good players in our team."

Robinson's assessment of himself is harsh, because he is one of New Zealand's most promising young backs and he concedes he is a better player than a year ago.

"I think I have improved since last season. Experience helps. When I first started out with Southland, you could hardly get a boo out of me. I talk and communicate a lot more now and that's important for a first-five or fullback."

Robinson had mixed feelings about his contribution when the Highlanders beat the Rebels 40-18 in Melbourne last weekend.

"I felt I had an OK game directing the boys around the field but throwing loose passes and losing possession when we're hard on attack is stuff I need to cut out of my game.

"And four out of 11 with the goalkicking certainly wasn't great. We were lucky it didn't matter. I was hitting them well apart from two which I hooked wide. The wind sort of got to me. It was pushing the ball in different directions. Danny Cipriani didn't have the best day, either."

Robinson has no doubt the Crusaders, even with multiple changes to their starting 15, pose the ultimate challenge.

"Definitely. You're measuring yourself against the best. Last time we played them (13-44 loss) we thought we had a shot at halftime but things blew out in the last 20 minutes.

"But the boys are fresh now and, even though we've got a few injuries we've got a good plan in place and, as long as we execute it well, we have a chance of tipping them up."

Robinson was impressed with the pace of the game the Highlanders played in Melbourne last week.

"We had a really good training week and, when everyone's talking it makes life as a team so much easier. All the boys were talking and there were always options."

Robinson has noted a big change in attitude within the Highlanders camp this year.

"We're building a new culture. The senior players and management worked pretty hard before we got together and wanted to start something which would be special to everyone.

"Everyone bought in and implemented it. Everyone gets on and it's just a really good environment."

Robinson has no problem about moving from first five-eighth to fullback tomorrow.

"I'm more than happy to go back to fullback. There's a bit more time and space there."