Rugby: Vainikolo vows to put 2009 pain behind him 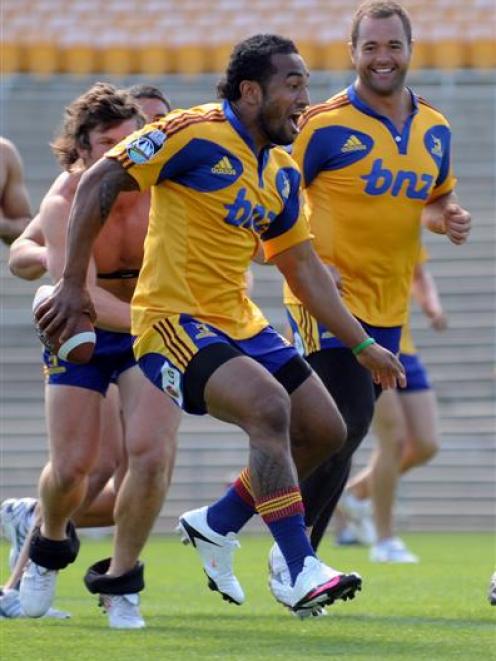 On one side was Ben Smith; on the other, Fetu'u Vainikolo.

Smith slowly grew into form for the Highlanders and then was outstanding for Otago in the provincial season, culminating in selection for the All Blacks on the end-of-year tour.

Vainikolo started off all right but failed to kick on with the Highlanders, while he never got going for Otago, failing to see the ball and falling off tackles.

So Vainikolo is not slow to agree that 2009 was a year to throw in the dustbin.

But for the Tongan winger, that was then and this is now.

"Last year was frustrating, to be honest.

"It just was not my year.

"I got injured and tried to keep going and the harder I tried the worse it got," Vainikolo said.

The injury pains started even before the first ball had been kicked in the 2009 season.

At a church and family picnic at Christmas time, he badly pulled his right hamstring when playing a game of touch.

That put him on the back foot in terms of fitness and Vainikolo (25) admitted he came back too soon.

"I just did not rest it.

"I came back too early and then all I ended up doing it was making it worse."

Vainikolo thought he eventually got over his hamstring injury but just as the provincial season started, he was lowered by a knee injury against Northland.

He strained his posterior cruciate ligament in his left knee, and never got going again as the season ended on a low.

"Playing on it just did not help it at all.

"I tried to play on but that just made it worse."

It is fair to say Vainikolo was glad to see the back of the 2009.

Now is a new year, and Vainikolo is champing at the bit to get back on to the field.

After all, this is a player who made a great impression in his first season with the Highlanders in 2008, when he tore up defences, topped the team's try count, and became a marked man.

He wants those days to return, and said he was fighting fit.

"I've done all the rehab, done a lot of running, shorter sprints, long runs. A lot of work."

In a competition like the Super 14, the Highlanders need to have all their weapons firing.

Judging by what he has delivered so far, Vainikolo may be back back in the groove this year.

"I'm excited about the season and really looking forward to it.

"Dunedin is a lot more laid back than up north and not so rushed, so I'm enjoying it a lot."

Vainikolo will be joined by his partner, Rose, and daughter Asena (4) in Dunedin shortly, and is looking forward to getting his daughter settled in the south.

- The Highlanders will hold an open day at Carisbrook tomorrow, starting at noon.