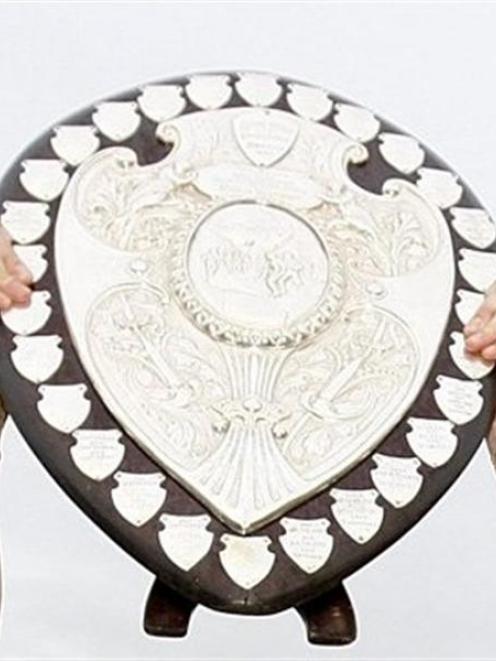 The Ranfurly Shield. Photo: ODT files
The North Otago side will not get a lot of training together before its tough assignment at the end of the month.

North Otago kicked off its representative season with a narrow win over King Country in Oamaru last Saturday.

North Otago won 27-19 after making a good start. It will now get set to play a Ranfurly Shield challenge against holder Hawke’s Bay on June 30.

With the club competition in full swing, the representative side is practising just once a week on Wednesdays and will continue to do so for the next couple of weeks.

North Otago coach Jason Forrest said it was the best the team could do; he was happy with it as the club season took priority.

Forrest was pleased with the side’s performance in its win over King Country.

Many changes had been made at halftime, with virtually a new backline coming on and some changes in the forward pack.

Some players had put their hands up while others had not, Forrest said.

No8 Mosese Aho had impressed, as had forward Samvela Baniau, while youngster Oliver Kinzett got around the field and worked hard.

Hayden Todd, who had been playing for the Cromwell club but moved to North Otago to get a chance to play in the Heartland Championship, impressed, making some good reads on both attack and defence and showing leadership.

Forrest said the intention at this stage was to not use loan players for the shield challenge.

The 23-man playing squad for the challenge will be named next week and will be able to train together.

Hawke’s Bay would be tough, Forrest said, and the side was not likely to get much ball so defence would be emphasised.

There will be no club rugby on July 3, the Saturday following the shield challenge.

The club competition is two games into the second round.

The club competition will have three weeks of finals, finishing on July 24, just under a month before North Otago’s first Heartland Championship match against South Canterbury in Oamaru.