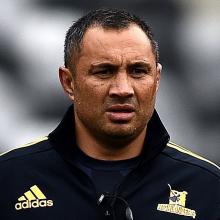 The Highlanders coaching staff were pretty annoyed with their side following the 32-20 loss to the Waratahs in Dunedin on Sunday.

"Preparing to be awesome" has been a catchphrase for the franchise this season, but it let itself down with its preparation last week.

Some of that was outside the team’s control.

Several players got ill midweek and a raft of late changes caused disruption.

But assistant coach Riki Flutey said the Highlanders needed to be better going into the game against the Rebels in Melbourne on Sunday.

"This week’s prep has to be massive," he said.

"[The players] have to make sure they are doing everything throughout the week in their prep to be on top of their game, so that they are not going to get surprised coming into the game.

The Highlanders’ discipline was not up to standard, either. First five Sam Gilbert was sent off in the 29th minute for a tip tackle on Michael Hooper.

Stuff is reporting the Sanzaar foul play review committee met on Monday evening and deemed the incident "mid-range", which means Gilbert faces a lengthy ban likely to put him out for the remainder of the season.

The Highlanders said they expected to have a decision from his hearing last night.

Gilbert’s absence will leave the Highlanders desperately short of options.

Regular first five Mitch Hunt is working through the return-to-play protocols after experiencing concussion symptoms and is unlikely to make a return this week.

That leaves veteran Marty Banks and utility Vilimoni Koroi as the only viable options.

Both were overlooked when coach Tony Brown sprang a surprise and named Gilbert at first five for the game against the Western Force.

He had been playing at wing or fullback, but his physicality proved an asset and he featured strongly during the 61-10 win. But his reckless tackle on Hooper has blotted his copybook.

The Highlanders rallied following Gilbert’s red card but the visiting side finished stronger.

"It was a poor performance," Flutey said.

"You look at our attack side and we were loose — loose in the carry, trying to offload when we hadn’t dominated collisions and didn’t sight the target, all those little things."

The Highlanders gave away too many penalties on defence and were getting offside too often.

Powerful No 8 Marino Mikaele-Tu’u battled illness last week and went on from the bench against the Waratahs.

Prop Jermaine Ainsley was another to fall ill, and both should be back in contention for the run-on side this week.

Hard-running midfielder Thomas Umaga-Jensen is nursing a stiff back and Fetuli Paea has a quad strain.

Whether they play or not will be determined by how they get through training this week.

The Highlanders lean heavily on Umaga-Jensen and Mikaele-Tu’u to get the ball over the gain-line.