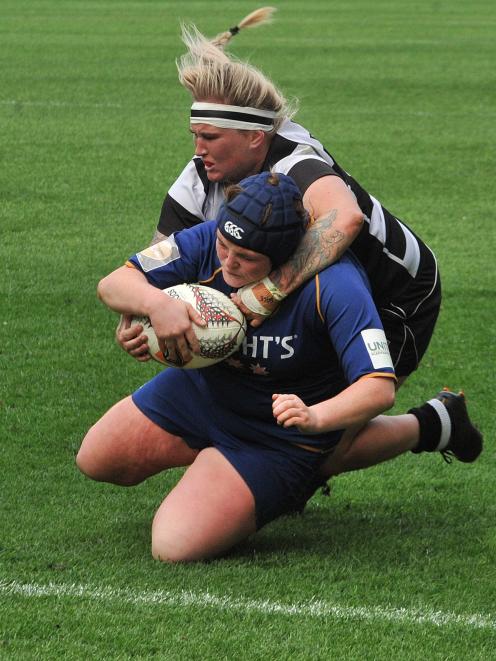 Otago Spirit prop Isla Pringle is about to go over for a try against Hawkes Bay in their Farah Palmer Cup Championship semifinal at Forsyth Barr Stadium on Saturday. Hawkes Bay No 8 Gemma Woods’s tackle is too late to stop her scoring. Photo: Gregor Richardson
A tougher challenge awaits, but the Otago Spirit can take plenty of confidence out of this one.

The side put on a classy display to beat Hawke’s Bay 34-10 at Forsyth Barr Stadium in Saturday’s Farah Palmer Cup Championship semifinal.

It showed plenty of firepower and regularly threatened from long range as it helped itself to six tries.

But it was its defence that really earned it the trip to face Wellington in next week’s final at Jerry Collins Memorial Stadium.

Otago led 17-5 at the break, but had to withstand wave after wave of attack from the visitors from the kick-off.

Had the line been breached, the score could have gone to 17-12 and the game would have well and truly been on.

But the line was not breached.

The Spirit tackled everyone who ran its way for four consecutive minutes, while also maintaining its discipline.

It eventually won a penalty and was able to clear.

That passage was one of several times the line held for long periods.

At other times the side scrambled well enough to deny the opposition when it had made good breaks.

That set the platform for the attack to do its work.

Centre Kilistina Moata’ane was devastating in that regard. She scored the first try after just a minute and a-half. She took a gap 40m out and showed her pace to make it all the way to the line.

Otago was under pressure again not long after, before a breakdown turnover from flanker Zoe Whatarau allowed first five-eighth Rosie Kelly to clear.

Whatarau then won the line-out after the throw went long and she ran another 30m. That allowed Otago to spin it wide to the left for Hume to score and make it 12-7.

Hawke’s Bay had the better of the territory for the rest of the half and was beating Otago to the breakdown. However, some solid defence and exceptional kicking from Kelly ensured no further damage.

Moata’ane went over again late in the half, capitalising a phase after an initial break from Greer Muir.

Prop Isla Pringle made it 22-5 15 minutes after halftime, when a quick tap caught Hawke’s Bay unawares this time.

Felicity Powdrell went over in the corner minutes later for Hawke’s Bay.

But from then it was all Otago. The lineout in particular was flourishing. Jess Kendall was exceptional, delivering quality off-the-top ball and stealing several Hawke’s Bay throws.

Around the park the side began finding space again and more tries were inevitable. It ended up scoring two within three minutes.

First Moata’ane made a break from a scrum in side her own half, before drawing the last player to let Hume run 40m and score. Then a Cheyenne Cunningham offload set Muir up for the final try, capping an impressive performance. 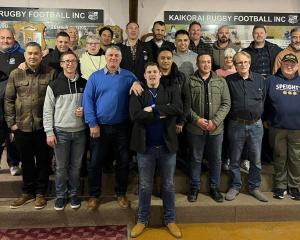