0 Comments
A kiwi soft toy has entered the space race and will be soaring 33.5km high into the stratosphere on a Nasa super-pressure balloon from Wanaka Airport next week.

While Nasa’s kiwi mascot will be the first kiwi toy to experience the frontiers of outer space, it will not be the first toy to be sent to the heavens from New Zealand.

In 2017, a group of year 6 "teddynauts" from Forrest Hill Primary School in Auckland twice sent "Space Teddy" up with a giant weather balloon, hoping to break the 41km-high record set by a "Raspberry Pi" teddy launched with a weather balloon in the United States in 2013.

New Zealand’s "Space Teddy" reached 28km on his first flight and 20km on his second.

The Wanaka-based Nasa super-pressure balloon team has made a tinfoil pressure suit for its kiwi mascot, which the crew picked up by while staying in MIQ at Rydge’s Hotel in Auckland.

Debbie Fairbrother holds a kiwi soft toy given to the Nasa crew while they were in MIQ. It will be added to their balloon payload (left). Crew (right) check the function of the parachute. PHOTOS: STEPHEN JAQUIERY
The kiwi mascot had travelled throughout New Zealand and been to Hobbiton before arriving in Wanaka in time for the launch — hopefully mid-next week, weather permitting.

"Oftentimes on our flights, we like to fly stuffed animals or pictures that can be seen by a gondola camera. 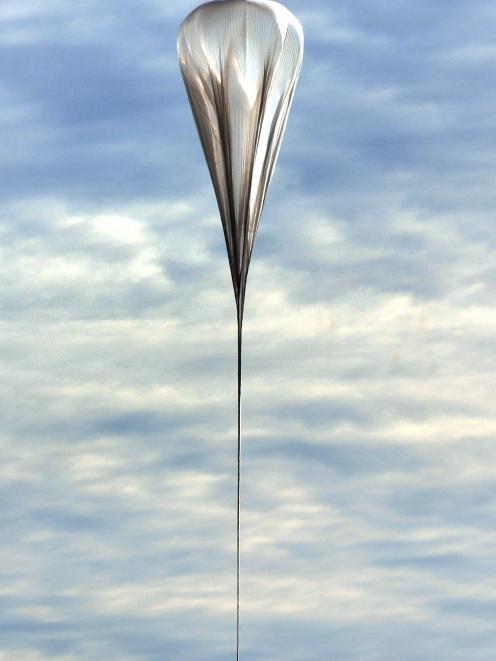 The super balloon launched in 2015.

"We figured this cute little guy would be the one to fly on this year’s flight.

"We also decided that in order to fly, it needed its own pressure suit," she said.

Ms Fairbrother hoped the kiwi mascot could be retrieved at the end of the flight.

In 2017, the Nasa crew attached an Anzac Day poppy to the gondola to acknowledge the contributions by war veterans and servicemen and women.

The goal was a 100-day flight but it lasted eight days, after the journey came to an untimely end over the Pacific Ocean.

Yesterday, the crew was up at 3am to roll out the payload and parachute and do a final function test.

Ms Fairbrother said a 100-day flight was still a goal, and if achieved the team would do a "happy dance".

All the team hoped for was a successful test of the balloon’s flight equipment and communications gear during day-night cycles at mid-latitude.

"Tests went well today. We will be completing the compatibility test [this] morning, when we will actually mate the solar panel skirt to the payload and hang the payload from the launch vehicle," she said.

Got a name for Nasa’s kiwi? Email regional editor stephen.hepburn@odt.co.nz before 6pm tomorrow (Friday, May 6).