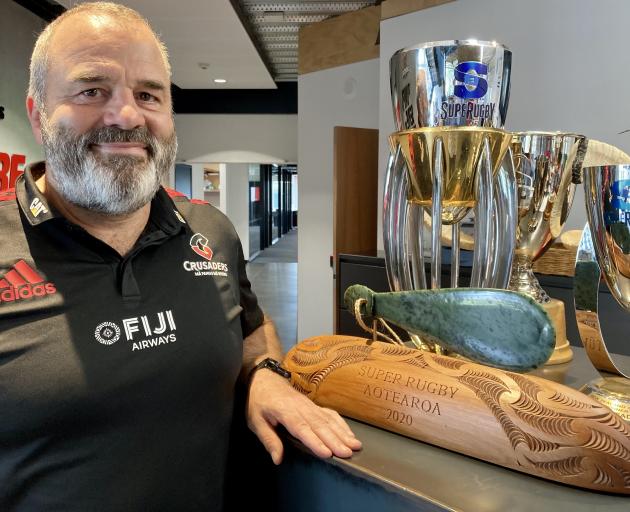 Created by Otaki carver Bill Doyle, Tu Kotahi Aotearoa (Stand as One, New Zealand) unexpectedly ended back in his care after it was damaged during the Crusaders’ post-match antics after they beat the Highlanders to claim a symbol representing five Super Rugby franchises coming together through the Covid-19 pandemic.

The Crusaders were criticised after images depicting chips and scuffs on the totara base went viral soon after August 15 clash and, after making an apologetic trip to visit Doyle, chief executive Colin Mansbridge has finally been reunited with the trophy.

It was returned to the Canterbury Rugby Football Union headquarters at Rugby Park by New Zealand Rugby officials to coincide with the Farah Palmer Cup final there on October 31.

Mansbridge had headed a delegation to return the damaged trophy to Doyle, with the group also including captain Codie Taylor and loose forward Whetukamokamo Douglas.

“We knew we had to do something and when we went up it was clear they wanted to tell us how they felt. We were welcomed, there was a challenge, very fearsome, very emotional,” Mansbridge said, recalling the powhiri and haka they received at Pukekaraka.

He said the exercise emphasised how the Crusaders had not treated the trophy with the reverence it deserved.

“We hadn’t done enough work on understanding the significance of this trophy. The story around it is really quite special.” 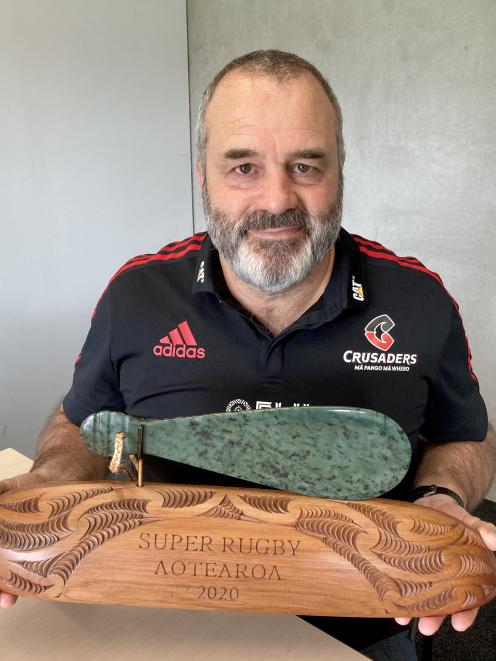 Crusaders chief executive Colin Mansbridge said the organisation vows to take better care of the Super Rugby Aotearoa trophy. Photo: Chris Barclay
The base represents an upturned waka to signify the disruption Covid-19 had on rugby in 2020 while a patu pounamu rests on the top – and temporarily went missing during the celebrations.

Doyle also etched a number, 11, on the underside of the base in recognition of his son Sam, a former Hurricanes back who was diagnosed with leukaemia this year.

Restoring the trophy wasn’t onerous for Doyle, who was happy to carry out the work free of charge.

“It had some nicks and scratches. I didn’t have to make a new one. I just cleaned it up and shaved a bit off here and there and redid some of the patterns so it looks good as new again,” he told Otaki Today.

He did make one request, however: “I think the players should understand that it isn’t just a trophy. It has patterns on it and it tells a story. That’s important.”

Mansbridge insisted there was no issue on that score.

“It was bad form and the whole organisation learnt from it. 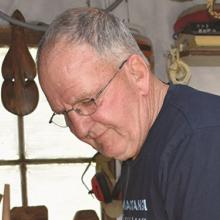 Bill Doyle. Photo: Ian Carson, Otaki Today
Mansbridge said education comprised “95 per cent” of the rehabilitation process with locking up the trophy after the lap of honour too simplistic a solution if the Crusaders also won next year.

“Imagine if that’s all we did? it’s easy to tell the manager to go lock it in a cupboard,” he said.

For now the trophy is secure in the CRFU foyer though it may eventually gain wider exposure.

“Our trophies do spend a bit of time in the community in different environments but we’ve got so many of them now people get a bit bored with it,” Mansbridge said.