It was a great day for Jaydean Washington, of Waldronville, who won best caged bird in show for his Gloster canary.

Jaydean’s love of birds began early — he recalled getting a book on budgerigars when he was very young.

‘‘In all birds there are so many different varieties, colours, shapes.’’

He had raised budgerigars, Yorkshire canaries, Gloster canaries, and ‘‘all sorts of finches’’. 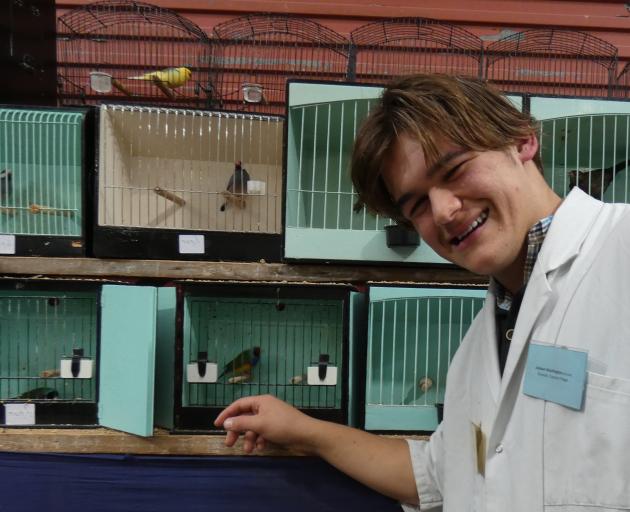 Birds on the brain . . . Jaydean Washington (16), of Waldronville, shows some of his caged birds at the New Zealand National Show Cham pionships at Forrester Park last Friday. PHOTO: SIMON HENDERSON

His tip for raising an awardwinning bird was a good diet, which involved fresh New Zealand grown seed as well as vegetables and protein.

For smaller finches he fed them mealworms and maggots ‘‘to get that extra protein, because in the wild that is their main source’’.

Dunedin Poultry, Pigeon and Cage Bird club president Stu Aitken said it had been exciting to host the national show for the first time.

‘‘It is unbelievable, it is the biggest show we’ve had in the 45 years we have been going.’’

More than 1000 people attended the show on Friday and over the weekend. There were more than 1500 birds on display, and exhibitors came from across the country.