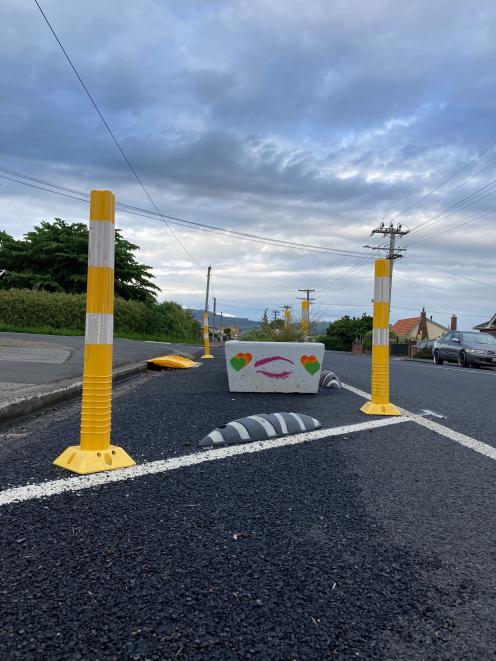 A kerb protrusion in Bush Rd, Mosgiel. PHOTO: JESSICA WILSON
The Mosgiel-Taieri Community Board is making it clear it had no decision-making power in the Mosgiel-Taieri Safer School Streets Project.

At the latest meeting, board members spoke about the backlash on the project and the abusive online comments.

The project is run by the Dunedin City Council and 90% funded by the NZ Transport Agency.

Originally called Mosgiel Safe Accessways, it was the brainchild of former board chairwoman Sarah Davie-Nitis about two years ago.

The then board asked the council’s transport team to lead the project.

Mrs Davie-Nitis is no longer on the board. Chairwoman Joy Davis, deputy chairman Dean McAlwee and member Phillipa Bain are the board representatives for the project.

Temporary infrastructure, such as planter boxes and kerb build-outs, were installed in September.

Mrs Davis wrote in her November report constructive criticism was welcome, but the "abusive and negative comments posted on social media are unnecessary, unhelpful and do not contribute in any useful way".

At last week’s meeting, board member Brian Miller was concerned the project group was making decisions on behalf of the board.

The public believed the board was involved, when only three members were, he said.

He wanted to see the 280 submissions made by residents to the council.

Mr McAlwee said most of the board representatives’ involvement was information gathering and the board was "guilty by association".

They shared their views and community members’ views but did not get to dictate what was decided, he said.

"I’ve put my views across and I think what’s happened is a shambles, all of it."

Mrs Bain said most of the backlash was from social media users who did not always read the full story.

She did not like the planter boxes and reiterated they were only temporary.

Mrs Davis said while people had every right to share their opinions, she had no time for people who did so in a negative way.

She believed aspects of the project needed to be fixed and the board would fight for changes in a "polite, respectful way — not in a vitriolic, nasty, keyboard warrior way".

Permanent infrastructure would be installed once the trials evolved into a design they were happy with, but was dependent on funding from the council and NZ Transport Agency, Ms Benson said.