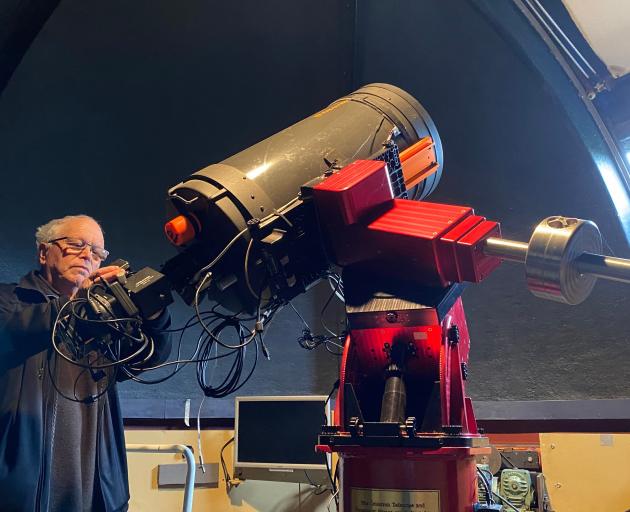 Described by Nasa as a "full Mars", this month’s "opposition" phenomenon — when the planetary orbits align so that Earth passes between Mars and the Sun — offers the best chance to view our closest planetary neighbour in 20 years.

The closest point on this pass occurred last night, but Mars is shining brightly in the night sky throughout October — giving both casual skygazers and astronomers a spectacular view of the red planet.

Dunedin Astronomical Society past president and life member Ash Pennell said there was a window of opportunity about six weeks either side of opposition when it was possible to view Mars really well.

"Last year was pretty good as well, but Mars was shrouded in a massive dust storm for the whole time, which made it hard to see," Mr Pennell said.

"Things are looking a lot better this time."

While Mars appears brighter in the night sky with the naked eye, a telescope is needed to make out features like polar caps and volcanoes.

To share the experience with the public, the Dunedin Astronomical Society is opening up its Beverly Begg Observatory, in Robin Hood Park, Belleknowes, on Friday and Saturday night, from 9.30pm until about 11.30pm — if the sky is clear.

Mr Pennell said telescopes would be placed outside for people to use, and it was advisable to come along later in the evening, as Mars would be low in the sky earlier on.

"Being lower in the sky, the planet can really be affected by the weather — so we will be hoping for the best and that people can get a good view," he said.

Interest in Mars has been high recently, after scientists discovered multiple "water bodies" under the south pole of the planet.

People interested in viewing Mars on Friday or Saturday, if the weather is clear, should wear warm clothing. A gold coin donation would be appreciated.