Conflict on the pathway 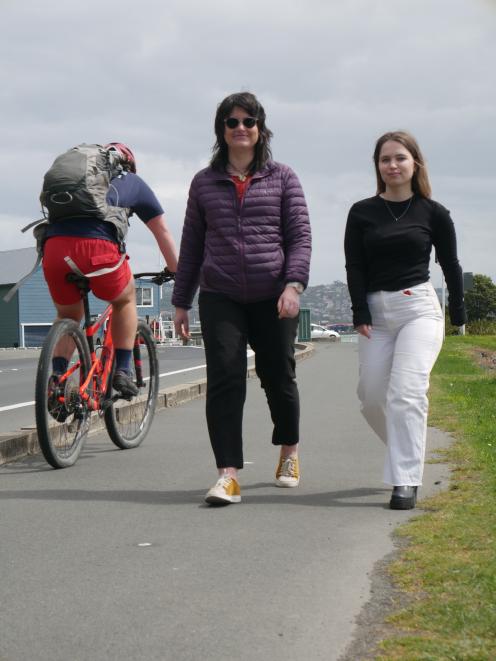 University of Otago sociology students Vanessa Beck (left) and Jacinta Aldridge walk along the Otago Peninsula shared pathway, as a cyclist rides past. PHOTO: JESSICA WILSON
There is a significant conflict between walkers and cyclists on the Portobello shared pathway, research shows.

They researched literature about national and international shared pathways, interviewed nine walkers and cyclists, and read Otago Daily Times letters to the editor.

Their project highlighted the ‘‘significant existing conflict’’ between walkers and cyclists on the shared pathway, which was further exacerbated during the Covid-19 lockdown and restrictions.

While conducting their interviews, they found most walkers wanted cyclists to use bells to warn other path users they were approaching.

But cyclists felt this was ineffective.

One walker, Michael, was concerned with the lack of bell-usage, especially from faster, racing bicycles.

‘‘If the bikes are coming up behind you at speed, they just need to ring the bell once and I’ll get out of their way,’’ he said.

James said cyclists who did not ring a bell were ‘‘virtually silent’’.

Many walkers had experienced ‘‘near misses’’ with cyclists, which made them feel unsafe on the pathway.

They felt the path was a beneficial resource to Dunedin and enjoyed using it for recreational and commuting purposes.

However, there was a ‘‘general disdain’’ for cyclists due to safety concerns such as cyclists’ lack of bell usage and travelling too fast.

Of the four cyclists interviewed, only one regularly used a bell and wore high-visibility clothing, and thought these made a difference.

The other three felt bells were ineffective as walkers did not hear them and many wore headphones.

All the cyclists tried to actively slow down when approaching other path users.

Jason believed the problem was a systematic city planning failure.
‘‘If they put seven extra metres on the width [of the road] would it really hurt to put an extra metre and a-half on it [the pathway] in the big scheme of things?’’ he asked.

None of the cyclists experienced a near miss or collision with an adult walker, but had with children, dogs and other cyclists.

The students recommended the Dunedin City Council install a fence on the harbour side of the pathway, put green paint on the pathway to indicate when it becomes a separate cycleway, erect more signage on the pathway, and put a clear directional centre line to encourage path users to keep left and give each other space.

The council was reviewing the NZ Transport Agency’s new guidelines on shared pathways to see how they could be applied to the Dunedin network.

It would also run a campaign this summer promoting safe use of the shared pathways.

The students’ others suggestions were noted and would be reviewed, Ms Benson said.

Otago Peninsula Community Board chairman Paul Pope said he was aware of issues between pathway users, such as cyclists riding at speed and people walking side-by-side.

The Peninsula Connection was still relatively new, so it was too early to make assumptions and people needed time to get used to it, he said.

He called for peaceful co-existence between walkers and cyclists.

Sadly the DCC have been informed of this problem many times and simply choose to ignore it. The problem is of their own making, the pathway along Portobello Road is too narrow and consequently unfit for purpose. The concrete blocks separating the path from the cycle path on the road have been placed too close for cyclists to pass between them (except for a stretch near Macandrew bay}., Responses for the council have been hard to get and generally unhelpful.
About half of the cyclists are fine, they give warning and slow down. The other half are plain ignorant and seem to think they are in the tour of Southland. Mamil's are by far the worst culprits. The problem is worse on a weekend when cyclists travel in from Dunedin to Mac Bay. The DCC really needs to get its act together before someone is seriously injured.
Good on the students for raising this issue.

Agree absolutely. Following incidents where I and family members were almost run down by cyclists I sent several letters to the Mayor Hawkins explaining why the shared path was not fit for purpose because many cyclists were using it like a racetrack. The Mayor has never replied to me. Initially his minions at DCC said there was no evidence of an issue as they had received no complaints and there had been no serious accidents (excluding the death that occurred in Macandrew Bay last year) I challenged this and asked why the NZTA forbade bicycles on footpaths? I was contacted by the City Roading Engineer who explained the footpath was not classified as a footpath by DCC but as a “shared path” so NZTA rules did not apply? DCC seems to think that by changing the name the hazards disappear and magically the path becomes safe. My family and I no longer use the path. If we take the kids to the park in Mac Bay we drive, if we go for a walk we drive to where we walk. The presence of cyclists on the paths makes going for a walk like playing Russian roulette. You are always waiting for the unseen and silent cyclists to run you down.

As the previous comments mentioned at least half do not not give a damn and cycle at speed and expect walkers to stop and give way to them! They had no pathway before and cycled on roadway but now its menacing and because of that it spoils it for walkers because some idiots will not even slow down.

Similarly, there was no footpath before, so walkers, well, didn't. Just like some cyclists don't slow down, some walkers block their ears and spread themselves, their dogs, and their families across the full width of the path. This is not only about selfish cyclists, but selfish walkers too. And if you want to cycle at speed and so use the road, then the vitriolic abuse from drivers just adds to the joy of having cars buzz too close, and--oh, shucks, fail to slow down. So maybe a lot more consideration from everyone is the solution?

Walkers will often spread out to attempt to ensure cyclists slow down. Sadly the path isn't wide enough for a family group so, unless you expect them to walk in single file, they will take up the whole path at times. Any cyclist who wants to go fast (usually those in lycra) should use the cycle lane on the road, or, if they don't like it, cycle elsewhere.

Interviewing 9 people, and reviewing media letters with their universally recognised bias to the negative is not the basis of a publishable research project.
Ignoring the results, the methodology, as reported, is both laughable and as a University member embarrassing: the onus rests with these poor students 'supervisors' - this isn't research, it's hearsay.

It’s a bit of a worry that the value of a “snapshot “ review of information is consider not to be useful research but hearsay. The inference that interviewing and reviewing media letters is “universally recognised “ as biased is itself hearsay. While the study sample may be small their views probably represent the view of the silent majority. As a Macandrew Bay resident I concur with the view that cyclists are a serious hazard on the path. It is impossible to have a relaxing walk along the path because of the need for continuous vigilance avoiding cyclists. Consequently I do not use the path.

To be fair we don't know the full context of the 'research' and I don't see anywhere that it is to be published. My guess is that it was designed for the students to work through the research process. It would be good to have a full research project on this problem, maybe a MSc thesis. That might give the DCC a clue as to how to proceed as, at the moment, they seem clueless.

A bit of a parsimonious remark from an alleged University member. I suspect the research undertaken by the students is in far more detail than anything undertaken by DCC. No doubt DCC will do nothing, though I suppose they could put of some nice rainbow signs asking cyclists to think?

I'm a cyclist but sometimes I'm ashamed of my fellow two wheelers when I see bad attitudes on what is after all a shared pathway. If you can afford 3k for a bike you can afford 20 bucks for a bell!

I use the pathway on the other side of the harbour from Town to St Leonards. I am a walker who walks the path often and none of these problems have ever occurred while I was out walking. Most cyclists ring their bell which I can hear very clearly, people are generally polite and nothing is a problem, even in areas where the path gets quite narrow. People simply use their commonsense so why is this not the case on the other side of the harbour. ?

I agree, use the same path and have never had a problem. Generally find all users of the path very considerate and polite.

The other side of the harbour is sunnier and more attractive (no fertiliser factories and railroad) consequently it gets a much higher number of recreational cyclists.

Just reflecting on the comments from Ms Benson. If you put your fingers in your ears and close your eyes, you tend not to notice issues!

What about the cycle lane on the road side of the shared walkway? This is hardly ever used and is a waste of space. It's simply bad planning as there would have been room for a separate walkway and cycle way. The existing shared path should be limited to walkers, families and cyclists who are willing to travel at a low and considerate speed. All other cyclists should be in the CYCLE lane.
The shared path is treated as a race track by an inconsiderate minority.

I walk on the Portobello path almost everyday. Through the week cyclists are mainly ok and considerate. The main problem is at weekends. I have spoken to many walkers who now avoid the pathway at the weekend because of entitled, arrogant cyclists who show no consideration for pedestrians. There are a number of problems - the path is poorly designed, there are no rules or guidance from DCC or NZTA about using the path. DCC have said they will provide 'education' but that hasn't happened. The local policeman has expressed his concern so maybe something will be done before someone gets injured.

The lycra cyclists who use the footpath for speed trials are complete idiots... and really what is wrong with walkers spreading themselves in a group for a walk in the fresh air? Nothing!
Ban the bikes I say 👍