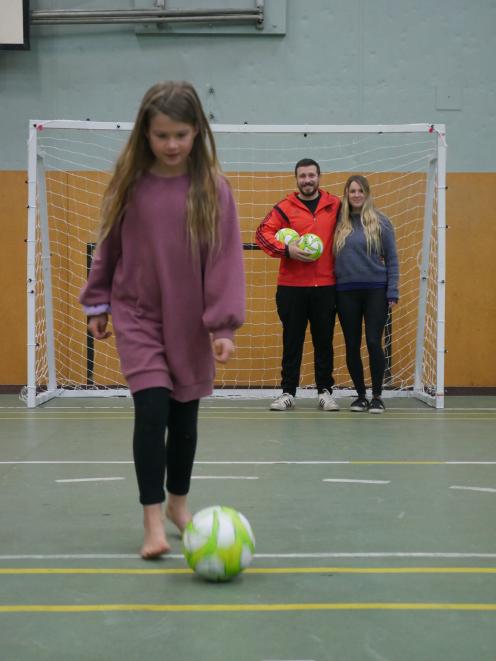 Sienna Sainsbury (8) kicks a ball while her parents and Dunedin Futsal Academy founders Maxi Baldoni and Michaela Sainsbury look on at the Sunnyvale Sports Centre. PHOTO: JESSICA WILSON
A Dunedin couple is on a mission to teach children futsal skills and rules.

While watching the children play, Baldoni was surprised that there was not much of a focus on teaching them the basic skills and rules of the game.

So, he took it upon himself.

Baldoni is from Argentina and has been playing futsal since he was about 4 years old, so wanted to pass on his knowledge.

Football and futsal are huge sports there, and people play and practise all year round.

He works at The Village Green Cafe and Bar, which is located in the Sunnyvale Sports Centre, so asked if they could use the gym once a week.

The academy is for children aged between 5 and 13, and is not purely based on futsal.

They do races, play games, and learn ball skills and body co-ordination — things that will help with other sports and areas of life.

One challenge is to throw the ball up in the air and see how many times they can clap before catching the ball again.

Sienna used to be able to do two claps, but can now do 10.

Many of the children had been with them since the academy started and had been making great strides.

"Our aim is to make great futsal players, and great kids as well," Baldoni said.

The academy is run on Friday nights during the school term.

Baldoni and Sainsbury hoped to grow the academy, include older children and host their own regular competitions.