By Shawn McAvinue
0 Comments
Dunedin man Gareth West is diversifying the way he earns a crust.

On any given day, chances are you will find him somewhere at Otago Museum — either inside the museum working as an archivist or outside on the lawn selling pizza from his caravan.

His first day selling pizza by the slice in Dunedin from his new business Slice of Heaven was on the lawn last week.

All his pizza slices sold out on the first day and feedback from customers — of whom many were his museum colleagues — had been positive.

He expected pizza sales to rise when more students returned to the city.

The dream was to "earn a living wage" by doing a mix of computer analytical archival work and the more "physical" work of selling pizza.

"I like the contrast ... doing two things suits me."

The "librarian-by-trade" learned how to "flip pizza" when he worked in the hospitality industry in Wellington.

"I love pizza — it’s one of my favourite foods."

He wanted a "lean business model" so decided on entering the food-truck market rather than leasing a shop, as it was

a smaller investment and less of an upfront liability. 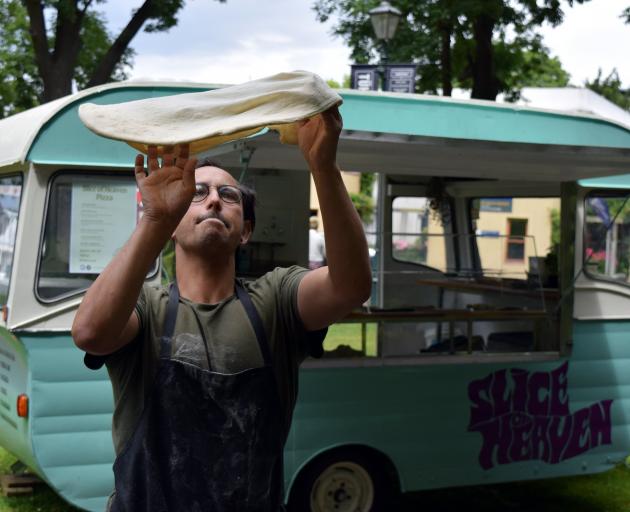 Before making his decision, he spoke to some Dunedin food-truck vendors about the market and then "crunched the numbers".

He bought a caravan in Tauranga "sight unseen" and he and his mates went on a road trip to collect it.

"It was an absolute mission."

In Dunedin, he fitted out the caravan including plumbing, wiring and benches.

"It was absolutely nuts — I brought about seven friends along to work shifts during the 18-hour days. I collapsed after that," he laughed.

He would sell pizza at festivals again but it was too soon to say if he enjoyed the "fast and furious pace" of the baptism by fire.