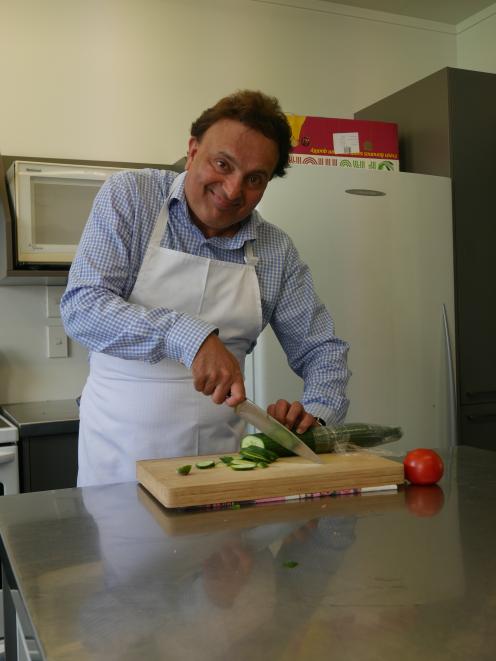 Culinarian Ronnie Bhogal prepares healthy and nutritious lunches for Mosgiel school pupils. PHOTO: JESSICA WILSON
Taieri Times is recognising people for the good they do in the community. In "Top Types" we are celebrating these people. This week, Jessica Wilson talks to culinarian Ronnie Bhogal, of Mosgiel.

Originally a pharmacist, Mr Bhogal got his degree in culinary arts about four years ago and studied food insecurity in Dunedin.

Since then, he has been cooking for people in need, including at Age Concern Otago, Carisbrook School and KiwiHarvest.

Determined to do more, he registered his home kitchen and started selling food and giving the profits to the Mosgiel Food Bank.

He also made about 1400 meals for the food bank, Mr Bhogal said.

"Then I looked at schools."

Mr Bhogal wanted to make a change, so partnered with Silverstream School to provide healthy and nutritious lunches for the pupils.

It started as a six-week project, and was extended to a full term.

Each day, Mr Bhogal cooks for a class, and once a week pupils visit his kitchen to help make the meals.

It was important for the pupils to be involved in the preparation so they could learn how to be resourceful with food, he said.

He has started a pilot study called Sons — Students On Nutrition Study — and measures children’s attendance, grade and cognitive behaviour.

Next year, he will cook for about 300 Mosgiel pupils, free of charge.

To support the initiative, he planned to sell some lunches as well.

The Saddle Hill Foundation Trust’s kitchen is in the process of being registered and Mr Bhogal hoped to start a vegetable garden on-site.

"Resources run out, but if you are resourceful enough there are always resources."

Mr Bhogal also planned to start cooking classes for children and their caregivers.

"As a team they’re going to use, say broccoli for example, and make something out of it."

He hoped that way children would have a better understanding and appreciation of the food if they cook it themselves.

"I want to spread the word about nutrition.

"We can’t change the world, but we can definitely change Mosgiel."