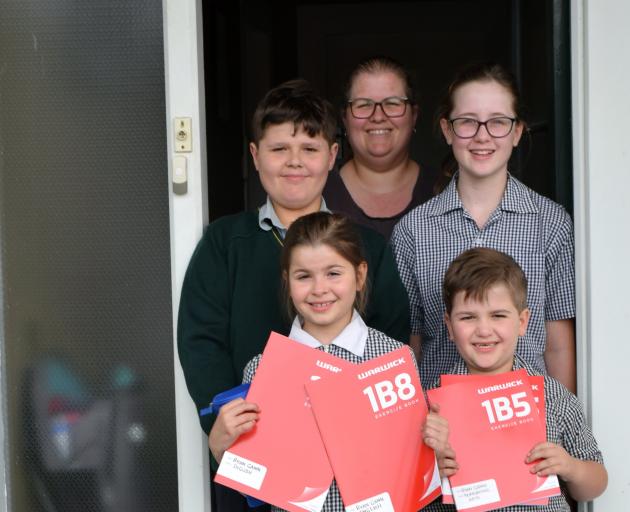 Melissa Gawn, of Forbury, said the start of the year was an expensive time for her family.

To get her four children ready, she began paying some of the costs months before school returned.

Her son Ryan was set to start Year 9 at Bayfield High School in Andersons Bay on Tuesday.

She had spent about $100 on his uniform.

Ryan’s total return-to-school costs — including uniform, stationery and a school camp on Quarantine Island from February 14 — was $290.

To get them all ready for school costs about $100.

The cost to attend Bathgate was cheaper than other Dunedin schools because it was decile-3 and got funding to subsidise costs, she said.

Senior Bathgate pupils needed a Chromebook laptop but could rent one from the school for the year for $40.

The stationery packages for Bathgate pupils cost between $22 and $28.

The costs were much cheaper than what they had previously paid in Canterbury.

The family moved from Ashburton in 2017, where the children attended a decile-9 school.

"You had to pay for everything," Mrs

School uniforms cost much more in Ashburton because "everything had to be emblemed".

In Ashburton a uniform for Nerida cost about $250.

After arriving in Dunedin, four Bathgate uniforms — including shoes, hats and polar fleeces — cost about $250.

She was able to buy Bathgate uniforms cheaply because most of it — other than the black and white check shirts — could be bought from any shop, allowing parents to bargain hunt.

"It helps parents because there are a lot of low income families at our school."

It was unfair to criticise schools for the costs of getting children ready for term 1, Mrs Gawn said.

"What they ask for is legitimate."

She knew teachers who spent their their own money to buy school supplies for pupils to use.