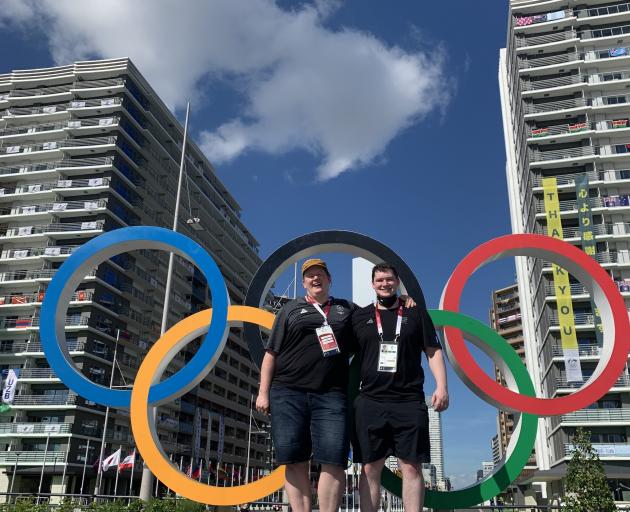 New Zealand weightlifter Laurel Hubbard and coach Callan Helms stand in front of the Olympic rings in Toyko last month.PHOTO: SUPPLIED
A Dunedin weightlifting coach is reflecting on his experience at the Tokyo 2020 Olympic Games.

Callan Helms was selected as one of the New Zealand team’s four weightlifting coaches, alongside Richie Patterson, Simon Kent and Tina Ball.

‘‘It was totally surreal,’’ Helms said.

His Olympic journey started earlier in the year, when Hubbard asked if he would coach her.

The pair knew each other through the Otago Weightlifting Club, of which Hubbard is a member and Helms is head coach.

Hubbard had moved from the Oceania Weightlifting Institute in New Caledonia and wanted a coach who knew her well.

Being selected to coach at the Olympics took a few months, as Helms had to be nominated by Weightlifting New Zealand and then chosen by the New Zealand Olympic Committee.

‘‘I only knew relatively close to the Games that I was going,’’ he said.

‘‘It was a bit of a whirlwind experience this year.’’

While Helms is no stranger to coaching at international competitions, the Olympics was a big step up.

Walking into the warm-up room was ‘‘dream-like’’ and he was in awe seeing athletes in person.

‘‘I was keeping tabs on what the competition was doing, what sort of shape they were in.

‘‘I’m a huge fan of weightlifting outside of coaching, so seeing these people in person was really quite surreal.’’

Hubbard’s preparation for the competition could not have been any better. She was in a good head space and performed well during the warm-up.

The game plan was to aim for big lifts in order to secure a medal.

Unfortunately, things do not always go to plan in sport.

She missed all three attempts at the snatch – one at 120kg and two at 125kg – and failed to win a medal.

‘‘It’s something that happens in weightlifting, especially when you’re pushing for big numbers.

‘‘Even though those are lifts that she’s hit multiple times in training, sometimes in weightlifting it just doesn’t pan out the way you hope.’’

Helms praised Hubbard for the way she handled the defeat, calling her gracious and inspirational.

‘‘She was just grateful to be given that opportunity and she loves the sport of weightlifting.’’

Former Olympian Patterson was Hubbard’s other coach and Helms enjoyed working alongside him.

Although the weightlifting competition ran like most others, strict Covid-19 protocols were undertaken to ensure everyone at the Olympics was safe.

Everyone had to do a saliva test and take their temperature every day.

In the dining hall, each seat had protective plexiglass around it, people wore gloves and had to sanitise their hands.

‘‘The Japanese people were just such amazing hosts and they made the most of a pretty suboptimal situation.’’

After about a week in Japan, Helms flew to Christchurch on a direct charter flight and went straight into a managed isolation facility.

By the time his two-week stay was complete, New Zealand was in Alert Level 4 and flights to Dunedin were cancelled, so he had to catch a van.

But he was still grateful for his Olympic opportunity.

‘‘It’s all of my lifters that make it possible,’’ he said.

‘‘If I didn’t have them and I couldn’t learn from them, then these sorts of opportunities wouldn’t present themselves.

‘‘Knowing that I’ve done that, now it gives me that extra confidence to continue coaching at that sort of level, hopefully, in the future.’’