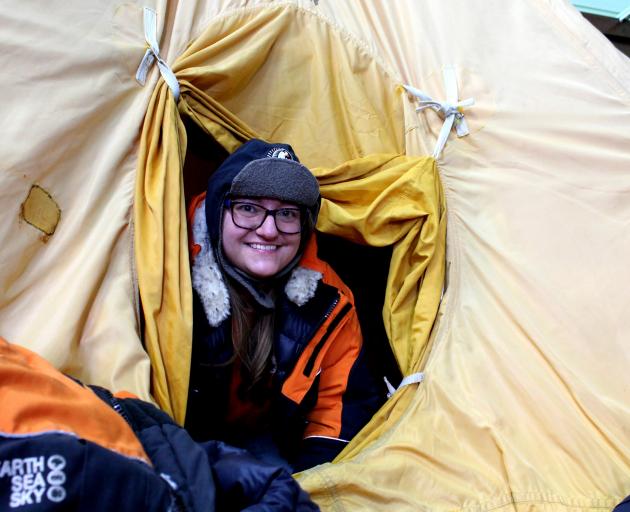 Far From Frozen venue co-ordinator Jessica Davis demonstrates the type of clothing and tent needed to work and survive in the Antarctic.PHOTO: SIMON HENDERSON
Far from being frozen in time, climate change is having an effect on the southern continent of Antarctica.

How researchers are mapping those changes was explored at Otago Museum’s ‘‘Far From Frozen’’ exhibition, taking place at the old Scottish Shop on George St as part of the New Zealand International Science Festival.

Venue co-ordinator Jessica Davis said hundreds had visited the hands-on exhibition which provided different ways to understand the environment in Antarctica as well as showing how global climate change could transform the continent.

A visual demonstration of ocean acidification was one of the experiments visitors were able to try.

As the concentration of carbon dioxide in Earth’s atmosphere increased, a proportion of the CO2 was dissolved in the ocean.

‘‘That creates what is called carbonic acid, and so that lowers the pH of [acidifies] the ocean water.’’

This could be demonstrated by exhaling through a straw into a glass of water dosed with a pH indicator.

Carbon dioxide in the breath changed the colour of the water, she said.

The exhibition provided insights from researchers who had spent time in the Antarctic, as well as showing the type of clothing and tents needed to survive the cold continent.

A projected map of the Antarctic allowed users to discover the hypothetical effect of melting of the continent’s ice sheets and sea level rise.

A number of virtual reality headsets were able to transport visitors on a ‘‘full 360-degree’’ experience of varied kinds of sites in the Antarctic, including travelling virtually underwater, Ms Davis said.