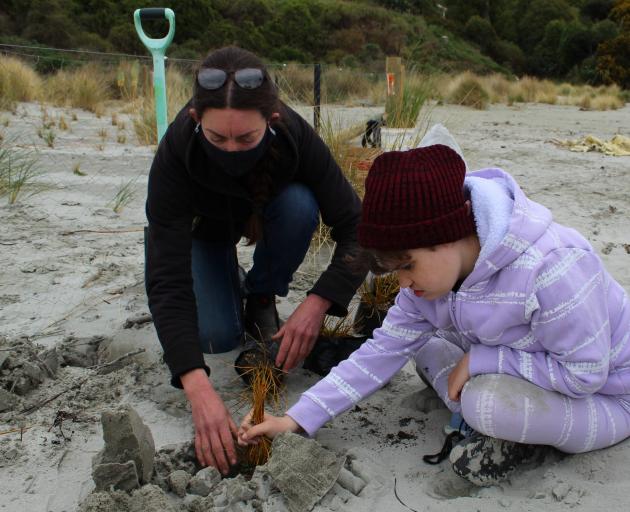 Okahau dune project organiser Angelina Young said there had been some planting of pikao about 20 years ago and although some of those plants had flourished, others had not done so well and so a project to reinvigorate the sand dune system would be a good idea.

Her first thought was planting would be slow, as starting with seedlings, plants would take more than two years to grow.

‘‘My idea was we would gather seed with the local kids and sow it and go through the whole process.’’

However, a conversation with Otago Peninsula Community Board chairman Paul Pope turned that idea on its head.

‘‘He came down and met me and got very excited about the site.’’

Mr Pope said he had been fascinated by native sand-binding sedge, also called pikao or pingao, for nearly 30 years. 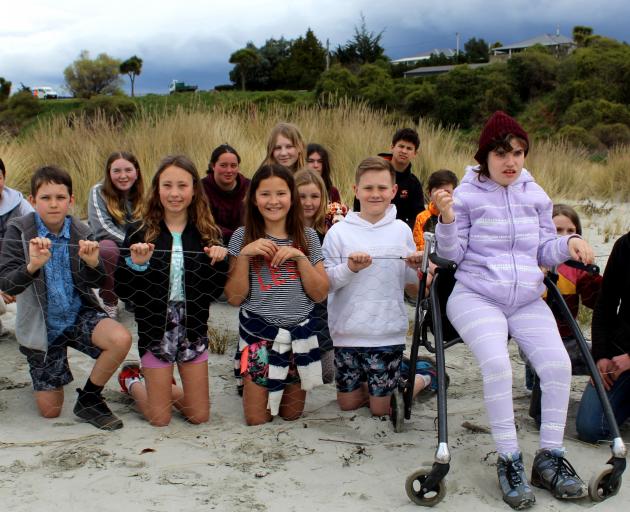 Okahau dune project organiser Angelina Young (far right) and Warrington School pupils were at Warrington Beach to learn how to restore sand dunes.PHOTO: SIMON HENDERSON
He approached the Otago Corrections Facility, near Milton, which has a nursery on site, to ask if they would be interested in growing pikao if he provided the seeds.

The inmates and staff had done a fantastic job, Mr Pope said.

Armed with 2500 pikao plants, a planting day was organised for July 10.

Local pupils and members of the community as well as University of Otago UniCrew students organised by Tash Cox took part in planting pikao in a 250sqm plot on the beach, now protected by a rabbit-proof fence.

Philip Parcell, of Tarras, donated funds to pay for transport of families and schoolchildren.

‘‘It is a special plant, a very special species and getting it back into the sand dunes is important,’’ Mr Pope said.

Ms Young said in the early days of colonial settlement pikao was often either burnt or grazed by herds, because with few roads, cattle were often moved along the coast on beaches.

Once sand dunes no longer had a covering of pikao, farmers noticed inland farms would be inundated with sand because there was nothing keeping it in place.

‘‘It is a keystone

The project was an opportunity for local schoolchildren to understand more of the history of the area.

‘‘It is a really important zone.’’

At one time almost every sandy beach would have had pikao stands.

The native fibres were used by Maori for weaving, to create tukutuku panels, making kete (bags), and many other functional and decorative items.

Future plans were to plant at other plots along the beachfront, Ms Young said.