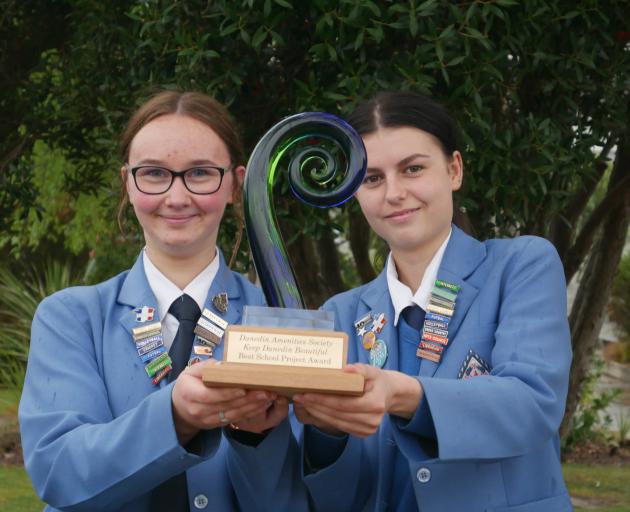 One of its latest projects — adopt a plant — involved pupils collecting kowhai seedlings, growing them in small pots with compost, and selling them to fellow pupils for a gold coin donation.

The money raised was invested back into pots and potting mix to allow more seedlings to be grown.

The group sold all 30, and even had some back orders.

Year 11 group member Caitlyn Petrie said they were shocked, but grateful to win.

They were presented with their trophy by Dunedin Mayor Aaron Hawkins.

Enviro group teacher-in-charge Matthew Sherborne said the group knew they were nominated, but did not know what project for.

"The panel just seemed to really like the fact that we’d taken what would have been waste, or thrown out, and turned it into a bit of a sustainable cycle," Mr Sherborne said.

"We do lots of different environmental actions throughout the year."

That included taking part in the Our Seas Our Future beach clean-up, which involved doing yoga at this year’s event, and making beeswax wraps.

The pupils sought the materials and beeswax, made the wraps, and sold them in an effort to cut down on the plastic waste in school lunches, Mr Sherborne said.

Caitlyn has been trying to improve the environment since she was a pupil at Carisbrook School three years ago.

She was one of the pupils who presented a petition to the Government to ban single-use plastic bags.

Tessa Conijn joined the group last year because she wanted to protect New Zealand and the environment as much as she could.

The group would brainstorm for their next project, but a "clothes swap" was high on the ideas list.