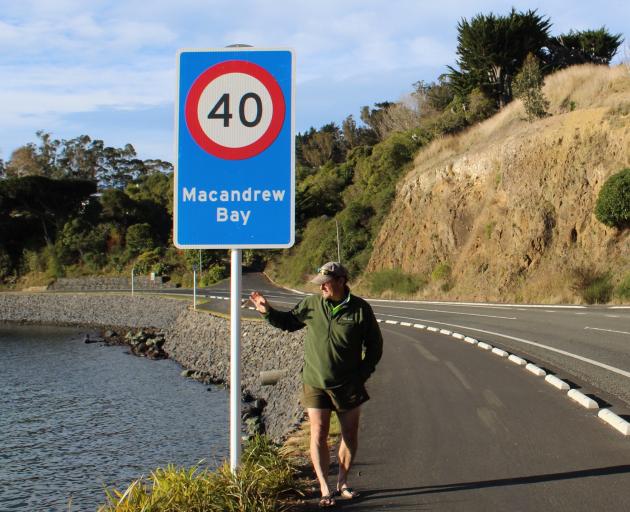 In a statement released recently Waka Kotahi director of regional relationships James Caygill said the impact upon travel time was "less than the length of my favourite song played on the car radio".

"In addition to reducing the chance of people being killed or seriously injured, a safe speed limit makes our roads and roadsides more comfortable for people, including children and older people, to walk, bike, scoot around."

Otago Peninsula Community Board chairman Paul Pope said he felt Waka Kotahi’s statement was a little flippant and a little bit disrespectful of the local community, because the board had come to the council time and time again with submissions.

Speed was not the only factor on the Portobello road and one example was recent accidents near St Ronans Rd.

"That corner is poorly engineered and poorly surfaced, and it has been well known in the community that the camber of that road is probably a contributing factor in those accidents."

It was reasonable to have 40kmh in certain built-up areas like Broad Bay and Macandrew Bay but the issue was how the 40kmh areas had been selected and the fact they covered about half of the 26km stretch of the road between Vauxhall and Taiaroa Head.

Both the board and the community were willing to compromise, and better design that focused specifically on the road to Portobello was needed.

This could be more graduated speeds, so 40kmh through residential areas, 50kmh in the less built-up stretches and then 70kmh in the open sections of the road, Mr Pope said.

As the chairman of the regulatory subcommittee which recommended the changes to council and as the councillor appointed to the Otago Peninsula Community Board he was very conscious of the frustrations of many residents and motorists on the Peninsula.

However, he stood by the recommendations the subcommittee made to the council to lower speed limits from 50kmh to 40kmh.

"We know that even when speed doesn’t cause a crash, it’s likely to be the key factor in whether anyone is killed or injured, or walks away unharmed."